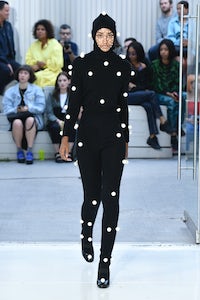 Sarca claimed her collection’s link to Nike was purely serendipitous, considering her practice of fusing her old trainers with kitten heel soles to create provocative, artisanal hybrids that plumb the depths of bad taste. “It’s not a collaboration,” insisted Sarca. “Everything is vintage, or broken, and I put it all together at home here in London.” When questioned on the scalability of her practice, Sarca cited new manufacturing connections in Italy and access to deadstock Nikes gifted by the sportswear giant. Her laced, pointed and peep-toe designs certainly ticked plenty of '90s redux boxes.

Gareth Wrighton is now in his second season of support from Fashion East. His work feels in step with the scheme’s longstanding support of rebellious London talent, yet his cerebral approach goes a step further than echoing punk and disregarding gender norms: it generates anarchic commentary on pop culture, globalisation and fashion itself. Poking fun at everything from American collegiate style to the runway trope of closing a show with a “bride” silhouette, Wrighton’s layered outing included everything from silk and cotton print separates dotted with rotting cherries to bondage and sailor references, all the way through to faux-cherry blossom branches ensnaring his skull-masked bride as a comment on memento mori.

While it was hard to see commercial through-lines in Wrighton’s fifteen looks, the designer offered knitwear as his strong suit backstage after the show. There were shrunken cardigans emblazoned with computer keyboard keys and a kaleidoscope of hairclips; another was woven with jingling bells. “I find knitwear poetic, I find it romantic, I think it’s sustainable, provocative. It’s my go-to, it’s the most readily subversive garment you can make, and there is very little waste that comes with it.”

Chinese designer Yuhan Wang, a Central Saint Martins graduate like Wrighton, holds a full-time job at Marni in Milan whilst churning out her eponymous collection in every spare moment she has. “I’m lucky we have all of August off in Italy, so I can finish my own collection,” she exclaimed after the show. “Working at Marni has taught me the business side of the job,” Wang said. “It’s everything we didn’t learn at school. Before, I worked like an artist and did whatever I liked without thinking about the budget, about how many dresses and skirts to make.”

Wang is sick of fashion’s streetwear obsession, which explains the hyper-feminised silhouettes which she embeds with Chinese motifs from beaded peach details to her own watercolour prints on floppy silk dresses. And whilst her studies in asymmetry and volume hold inevitable crossover with her work as part of Francesco Risso’s Marni team, the overt references to her homeland tend to short-circuit any comparison. Instead, Wang’s clothes play carefully between two of London’s most prominent fashion movements: the sickly sweet and pretty and the subversively deconstructed. With her final Fashion East show now behind her, next season will be Wang’s chance to prove her label’s staying power on her own terms.