This season's designers were a wonderful example of how far British fashion has come in terms of marrying creation, commerce and diversity. 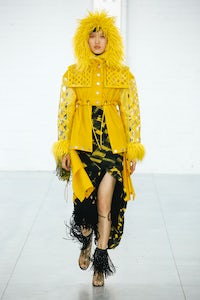 This season's designers were a wonderful example of how far British fashion has come in terms of marrying creation, commerce and diversity.

LONDON, United Kingdom — This far down the line, Lulu Kennedy’s Fashion East programme needs little introduction: it’s been the petri dish for many of London’s most talented designers for nearly 20 years. Her latest crop are a wonderful example of how far British fashion has come in terms of marrying creation, commerce, and diversity – the latter a key factor that truly complements rather than defines the aesthetics of Asai, Charlotte Knowles, and Supriya Lele.

Undoubtedly the most flamboyant of the three, Asai, real name A Sai Ta, has developed a cult following for his skin-tight, overlocked patchwork tops à la 1990s Gaultier (model Kiki Willems was spotted in one the night before). However the Vietnamese designer’s latest offer pushed into a wilder, more textural territory for Autumn.

The takeaway here was a riot of technique and handwork — the designer calls it "anti-perfectionism" — with shredded tweeds, deconstructed checked coats, wrap-around quilted hunting jackets and other clichés of the great outdoors. Layered together, his pieces melted into rich, confusing cacophonies, yet these heavily-worked pieces will hold considerable styling appeal on their own.

Later on, Charlotte Knowles and her design partner Alexandre Arsenault tripped a decidedly more minimalist route. Their flare for lingerie construction informing the light, late-1990s, early 2000s aesthetic that dominated their line-up. Tortoiseshell and blurry guitar pick prints came layered over and under mesh bras and tank tops, and giant plastic paillettes covered an apron skirt and dress, the amalgam of which, though Knowles has spent time at Helmut Lang, lent a little too heavily on Miuccia Prada’s early work.

The final designer of the triumvirate, British-Indian designer Supriya Lele was the most intriguing of the three, in that her elegant handling of South Asian references felt like such fresh territory on London’s catwalks. By transposing sari shapes with grungier, techno elements like neon yellow velvet, flyaway nylon draping, and leather trousers, Lele’s designs avoided anything too literal in their translation. She even elevated traditionally Indian styling tropes (a long tube dress over pants, for example) as cool, street-smart options for today.