Finding The Faith at the RCA MA Show

The respected art college's MA show was a Disneyland for sartorial ideas, and after the results of perhaps a game-changing UK election, it’s all taken on an unfamiliar sense of optimism. 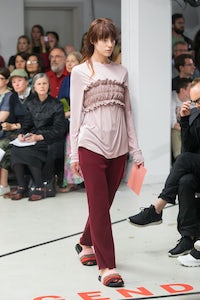 Finding The Faith at the RCA MA Show

The respected art college's MA show was a Disneyland for sartorial ideas, and after the results of perhaps a game-changing UK election, it’s all taken on an unfamiliar sense of optimism.

LONDON, United Kingdom — It’s a funny thing, faith. Some people worship five times a day in the direction of Mecca, others every so often at temples of subculture, art or hedonism. What connects these seemingly opposite ideologies is a sense of belief in something greater than oneself. Young people, we’re told, lack that ability and deeper spirituality — some critics will go as far to say that the Internet killed it. We’ve even been led to believe that today’s kids, who go out of their way to avoid eye contact and are so tactless that they would turn the Queen’s funeral into a meme, are essentially politically and socially apathetic, obsessed only with Snapchat and selfies.

At last night’s RCA show, on the eve of election results that could change that very generation’s lives, it seemed that these young fashion rookies had found their faith. The show opened with a Muslim call to prayer, with a group of women in leather-trimmed black robes unfolding a central figure’s skirt to create a mat for them to pray together. It was the work of Zahra Hosseini, an Iranian-born student, who wanted to celebrate her Islamic heritage. But the real beauty of it was that elsewhere was another Iranian student, Maryam Navasaz, whose installation of sculptural objects articulated her sense of suffocation from being forced to wear the veil in her motherland. Both were equally moving, and communicated the power of clothes in relation to freedom and religious tolerance.

The wide set-up of the show was genius, largely because it allowed for each designer to consider the format of his or her presentation (every designer on the course shows by the way). Some were in full-speed cartoon camp; others came out in Stonehenge formations or with a swaggering gang mentality. One highlight, the work of Bianca Saunders, was lit by soft pink light, and had a moment where the central character was lifted by his fellow brothers — it was a sonnet on black masculinity, and in a few minutes had just as much beauty as the whole of “Moonlight.”

The power of brilliantly crafted clothes was also testament to the power of faith in an object. Elizabeth Vale’s navy wool sailor pieces and denim archetypes, with their perfect proportions and minutely detailed ghost seaming and stitching, were the kind of quiet clothes that say the most. Camilla Damkjaer’s tropical-hued collection had in-built aluminium foil structures in the fabrics that allow them to be moulded into whatever shape, so that gesture can be sculpted and clothes worn in a number of ways. Mathilde Krab Nymann’s collection originated from slow-mo snapshots of smashing porcelain and resulted in archetypal garments being taken apart at every detail and re-pieced with incredible sense of dimension. She said she read a lot of philosophy, and it came through in the minutiae of every detail being considered with existential verve.

There were times when beliefs were challenged or satirised to brilliantly witty effect. In the basement, there was a bizarre moment of near-naked models being poured with fluoro slime, sort of like the gunge booths on children’s television. Abbie Stirrup, its designer, was there in her own neon bodysuit and chartreuse buzz-cut and eyebrows. Emperor’s new clothes? Hear her out. She said that it was a blend of performance art and fashion. Sidenote: did you know that there is an Internet subculture of watching and making slime? Generation Z are obsessed with it. Stirrup summated that it has risen from a need for fleshy tactility because we spend all day touching the flat cold screens of our phones.

Aubrey Wang’s fishbowl-helmet feeding machines came via the future of the past, yet resonated with the absurdity of a Youtube crazy for bread-facing (look it up) and the burgeoning Asian market for hiring people to eat food on a webcam, apparently caused by the isolation of smartphone culture and the loneliness of eating alone. There was also Pippa Harries’ study on the madness of the mundane, with its domestic gingham patterns and household objects coming out to an intense repetition of the words, “And another minute passed.”

The four floors of the venue were like a Disneyland for sartorial ideas at every stage of the art-craft-commerce spectrum, and after the results of the game-changing election, it’s all taken on an unfamiliar sense of optimism.