Less May Be More

Steven Cox and Daniel Silver challenged themselves to pare back in more ways than one. 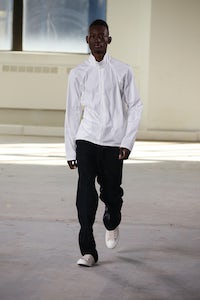 Less May Be More

Steven Cox and Daniel Silver challenged themselves to pare back in more ways than one.

NEW YORK, United States — It may be unintentional, but Duckie Brown’s Steven Cox and Daniel Silver are unfailingly contrarian. So it’s not terribly surprising that, after years of ignoring gender lines and challenging the definitions of menswear, they feel the urge to move in another direction. After all, the industry has certainly caught up. “I see a lot of chiffon and florals and feminine and womenswear,” Cox said backstage before the show. “When I see something happening in fashion in a lot of places at the same time, then I always go the other way.”

For Autumn/Winter, proportions and details were only slightly reimagined instead of exorbitantly. Consider the widened, shortened sleeve on a double-breasted coat or the drawstring hem of a meticulously seamed white shirt. Another white shirt, covered in utility pockets, doubled as a light jacket. Trousers in cavalry twill or grey flannel were paired with white Chuck Taylors. Classic.

Perhaps it was the most commercial collection the brand has ever presented. But just as boundary-pushing ideas did in the past, the overture served as an example for the rest of the industry. While runways have become a playground for Instagram bait, these were honest clothes. To give each piece gravitas, Cox and Silver forced themselves to shave the runway offering down to six looks. They had aimed for three, but it proved an impossible goal. “It’s easier to write an article that’s 5,000 words than it is 500,” Silver pointed out. For buyers and editors who enjoy a long read, the rest of the collection is available to peruse at the Duckie Brown showroom.