The collection marked a change for Valli and not just because of the arrival of Monsieur Pinault. 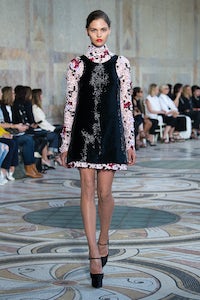 The collection marked a change for Valli and not just because of the arrival of Monsieur Pinault.

PARIS, France — Short, either sharply so or with a flowing train: the Giambattista Valli show on Monday night was all about fresh femininity and bare legs ending in ballerina flats or impossibly spiky heels. Even when draped to the ankles in ethereal columns redolent of Madame Grès, the Valli nymphs exuded a newfound carnality that felt innocent, with the slightest tingle of perversion.

It was grand, of course, as Valli's couture usually is, but less overtly so. The marvellous venue — the porches and garden of the intensely wrought Petit Palais — set the tone. The collection marked a change in the Valli system, in fact, and not just because of the arrival of Monsieur Pinault as financial backer. The offering was palpably younger, but still baroque and sculptural, while svelte and weightless.

Giambattista Valli said backstage that he was inspired by his own pictures of the flowers in the garden, which he turned into embroideries, prints and other tactile elements. And flowery it was: the show was a crescendo that felt suffocating like a violently fragrant bouquet of fresh flowers. There were way too many variations on the theme. A tighter edit would have carried the message across more swiftly. A king of the flowery, Valli truly shines when he works in subtraction and there were some superb specimens of creative restraint on show, the best of the collection.