As creative director Felipe Oliveira Baptista continues to morph the classic polo, 85 years on, Lacoste has managed to keep itself in the conversation. 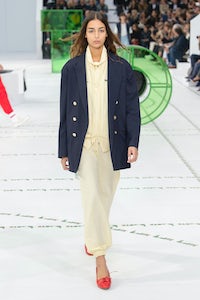 As creative director Felipe Oliveira Baptista continues to morph the classic polo, 85 years on, Lacoste has managed to keep itself in the conversation.

PARIS, France — In a time of major fashion anniversaries, Lacoste wins the prize: 85 years old in 2018. The Croc celebrated by coming home to Paris after 14 years of showing in New York. And Felipe Oliveira Baptista, now in his seventh year as creative director of Lacoste, used the landmark as an excuse to cast his eye back over the decades, to look at the brand’s global impact socially, as well as sartorially. Baptista was particularly engaged by the way in which such a definitively bourgeois item of clothing had evolved into a stalwart of street style. He namechecked La Haine, grittiest of all French movies, as a surprising reference point.

But there were actually surprising little flashes of recognition all over this collection. Some were obvious. The double-breasted, gold-buttoned navy blazer that was a signature of René Lacoste’s own style was revisited in new proportions. Others were cued by the styling and the model casting. Curly perms and aviators paired with sports shorts and sneakers were so 1980s porn, echoes of Boogie Nights maybe. Or, mainstreaming, Christopher Atkins in A Night in Heaven. The off-shoulder slouch and chambray were giving me Flashdance. Baptista mentioned Narcos, and Bruce Weber’s photos of Rio too. And what that web of free associations underlined was that, 85 years on, Lacoste has managed to keep itself in the conversation.

Right now, that’s due to Baptista. He’s initiated strategic alliances with artists to reconceptualise the Croc. This season’s was with Parisian design duo M/M who contributed the Art Deco-y prints with the croc all mixed up with sunglasses and tennis balls, and Baptista also continues to morph the classic polo. Towards the end of the show, it appeared as dresses, unbuttoned and twisted off the shoulder. René would have loved it.