The essence of the brand is an effortless, artisanal luxe — a promise registers with a particular relevance at the moment. 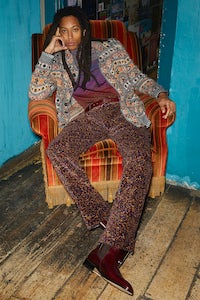 The essence of the brand is an effortless, artisanal luxe — a promise registers with a particular relevance at the moment.

MILAN, Italy — Miles Davis wore Missoni. He was classic in camel overcoats at the start of his career, but in the 70s and 80s as his sound became a Bitches Brew of jazz fusion, his wardrobe underwent a similar eclectic change. Enter Missoni. For its new collection, the brand dove deep into the archives of that time, pulling out stitches and patterns, re-editioning them for now by making them lighter, giving them a creative spin by showcasing knitwear as outerwear. A chunky cardigan paired with a sweater in a lighter gauge offered a modern take on the twinset.

Creative director Angela Missoni’s own sweet spot was Bob Marley, not Miles. Californian folk-rock – Joni, James, Neil - rather than jazz. But she was drawn to the bohemian glamour of Davis in his full fusion flight. An Ikat-inspired coat had a dressing-gown languor, perfect for lolling between sets in a jazz club’s backstage. Another coat, in felted wool, was over-embroidered with an Art Deco pattern that Angela had actually lifted from a carpet she found in Mali. A car coat that shimmered with an oxidised copper jacquard reversed to sober black chevrons. Pair any or all of that with printed velvet pants for maximum cool. Best of the lot was a double-breasted jacket in a black lamé knit, with matching stretch pants that had all the comfortable slouch of joggers. This subtly showy ensemble was essentially the most glamorous tracksuit you will ever see.