The designer channelled the peak 1970s abandon of French couture, but the collection felt present, not nostalgic. 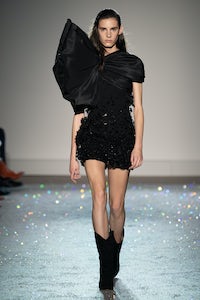 The designer channelled the peak 1970s abandon of French couture, but the collection felt present, not nostalgic.

PARIS, France — Are trains synonymous with haute couture? For sure they are: trains convey ideas of drama, of fairy tales and royals, of unattainable glamour. Trains are beautiful but unnecessary, and nothing screams luxury and power more than the superfluous. There were a lot of trains in the Haute Couture collection that Giambattista Valli presented on Monday night. Valli took over the ground floor of Centre Pompidou, a veritable Parisian landmark, and installed a labyrinth-like set in it.

Upon entering the room, the effect was visually striking: (faux) grass on the floor, scattered with crystals, and then green bushes drawing the perimeter of a square ring. Models walked confidently in this almost surreal space, most of them followed by the flow of a train, either in silk, moiré or tulle. A few trains did not have much life, others had plenty of drama, but all were the perfect complement to short, short dresses.

The train-wearing couture gals, in fact, might be eminent members of the international jet set, who, unlike their mothers, like to show their legs. After all, they are larger than life, confident, sexy Valli girls. This season, the Valli girls top their looks with fez hats, favour a certain orientalism or decorativism, and are drawn by sculptural silhouettes.

"I wanted to express the Salon de Couture spirit which is so typical of Paris, and which drew me to the city twenty years ago," Valli explained. "I created a little harem, a gathering place for exceptional women to inhabit, paying homage to an iconic moment for French couture." Think Saint Laurent and Helmut Newton at the peak of ’70s abandon, and you get the picture. One could almost smell Opium in the air. And yet it felt present, not nostalgic. Those trains were graphic and a bit cold, as was the collection as a whole. It added a cool factor.