The designer delivered the floaty tunics and flowery minidresses one expects from him, with just a bit more edge than usual. 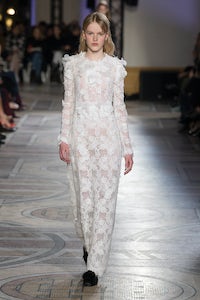 The designer delivered the floaty tunics and flowery minidresses one expects from him, with just a bit more edge than usual.

PARIS, France — Giambattista Valli staged his couture show under the exquisitely frescoed ceilings of the Petit Palais. "No​ ​one gets to see such wonders​,​" he mused. The grand setting, interspersed with modernist looking mirrored elements, proved a fitting venue for Valli's idea of couture: a mix of the frail and the pompous, the unabashedly seductive and the gracious. Valli’s women are either angelic creatures or dangerous ones. Maybe these are different aspects of the same personality. Valli is a real couturier, not a mere decorator: cutting and draping are a central creative drive for him.

This collection was particularly focused on draping. Working around a theme that might be dubbed goddesses fallen in a wild garden, Valli delivered some seriously floaty tunics, worn with ballerina flats, that gave an ethereal edge to the proceedings. "I want these creatures to be discovered little by little," he explained. To balance it all off, flowery minidresses and the signature theatrical meringues completed the offer. All in all, it was the Valli you come to expect every season, just a tiny bit less frilly than usual.