The show was a measure of the vaulting ambition with which Riccardo Tisci approaches everything he does. He demands respect for such effort. But respect isn’t love. 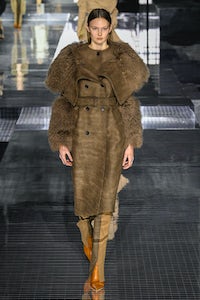 The show was a measure of the vaulting ambition with which Riccardo Tisci approaches everything he does. He demands respect for such effort. But respect isn’t love.

LONDON, United Kingdom — Is it even conceivable that it was really Arca orchestrating the live soundtrack for the new Burberry show, with internationally revered French siblings Katia and Marielle Labèque dueting on piano while the Venezuelan wunderkind, beloved of Björk, tootled with their semi-classical tunes? The sheer global repute of so much talent, concentrated on a mirrored dias raised high above the audience, was a measure of the vaulting ambition with which Riccardo Tisci approaches everything he does. He demands respect for such effort. But respect isn’t love. Love comes with warmth and intimacy and an outreach that embraces a shared humanity. On Monday, Tisci’s Burberry was as cold and distant as that mirrored dias, or the elevated catwalk, also mirrored, on which it rested.

There’s a fundamental paradox here – the chasm between the man and the work. He’s lovely. All about the upbringing and the sisters and the good times with friends and family who love him. But a chill analytical quality seems to descend when it comes time to translate those warm fuzzies onto a Burberry catwalk. With his own label, and with his time at Givenchy, it was easier to trace the congenital threads: Goth club kid, Catholic guilt, hyper-sexualised sports fan. But Burberry comes with the baggage of fashion antiquity. Trench. The word itself suggests something it’s hard to get out of. Tisci tried his best: shearling this, fichu that, plaid it, fuzz it. Check it. (The Burberry check is the other mountain any Burberry designer must climb.) Everything monumentally sculpted.

Which was curious because Tisci insisted this collection was maybe his most personal, most related to his past. He even called it “Memories.” Post-show, he spoke of his time in India, which he said was a huge influence when he was launching his own line 15 years ago. I chose to see the Burberry check morphing into madras, or the sash ties of Indian ceremonial dress. Maybe this was the point where Tisci meshed most instinctively with Burberry. He mentioned “the culture of Britishness,” an island race’s imperialist combination of radically different worlds that led to such casual kookiness as couture gowns with wellington boots. (Yves Saint Laurent was very taken by the same waywardness — he was fascinated by the Glyndebourne opera festival, with the women wearing macs over their evening dresses.) Maybe Tisci saw something similar in the way streetwear had evolved to embrace luxury.

Now I think about it, there is a clear route for Tisci to do something really interesting with Burberry, if he so desires. His problem is that he has made an equation of “global brand” with “grandiosity.” Giantism doesn’t feel modern. Almost anyone could pick apart the 100 looks he showed and tell a concise, particular story that was his as well as Burberry’s. Take a cue from Arca. Small is beautiful.