The collection had a clear motive, but the designer needs to bring back the creativity. 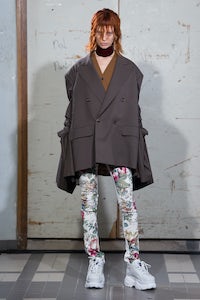 The collection had a clear motive, but the designer needs to bring back the creativity.

PARIS, France — The theme of the new collection may well have been “No Theme” (we fans of Japanese design cleave to such gnomic proclamations) but Junya Watanabe’s latest did actually have a clear motive. He was bent on transmogrifying the familiar, making it new.

Take a pinstripe jacket, pair it to floral leggings, supersize it, slash the sleeves open, make them wings. Do the same thing to a double-breasted coat in trad herringbone, but this time, make a cape rather than wings. Take a trench coat, replace the back with a panel of knit. Supersize a black leather biker, layer it over hot pink leggings. Try that again with an MA-1 flight jacket, but ruche the sleeves (and blacken the leggings). Anchor everything with Buffalo platform trainers, style number 1339-14. (In their heyday, the Spice Girls wore model 1310-2).

Then show all of this in a shabby basement corridor (Freddy Krueger’s round the corner) to the splintery, esoteric guitar sounds of Parquet Courts. And all at once, you’re confronted by an equivalence. Distinctly modern concept, so it dovetails with the distinctly modern output of fashion’s current guru Demna Gvasalia.

Oh, how it grieves me to make that comparison, but it’s been a while since Watanabe produced anything electrifyingly original. The most inspiring thing about Saturday’s show was the designer’s furious backstage activity, packing, wrapping, tidying everything away afterwards. He clearly believes in human industry. He just needs to bring back the creativity.