The deceptive simplicity of most of the pieces had a vibration that felt like a fight between ingenuity and maturity. 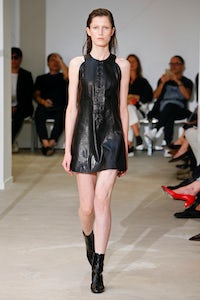 The deceptive simplicity of most of the pieces had a vibration that felt like a fight between ingenuity and maturity.

PARIS, France — There were great expectations for the Olivier Theyskens show today, set up in a glaringly white space hidden in the thick of the Marais. The designer, a darling of the fashion system, has had quite a bumpy professional ride: he was the enfant prodige among the second wave of Belgian designers in the late 1990s, then closed his own label and had successive stints at Rochas, Nina Ricci and Theory.

Theyskens started as a brooding romantic and ended up being quite the minimalist at Theory. Today's show felt, in a way, like a re-cap, in reverse: in an emotional crescendo, it went from a series of faultlessly tailored suits and tailleurs to the controlled drama of strapless gowns with long trains. It had the feeling of seeing something you already know, for the second time, knowing that nothing is really the same the second time around.

After all, Theyskens is no longer a super-young supernova. The baggage of knowledge and experience means a lot. The designer is in an entirely new position, too: he is building a serious business and cannot only create beautiful showpieces. This gave a slight feeling of melancholia to the proceedings: the deceptive simplicity of most of the pieces had a vibration that felt like a fight between ingenuity and maturity.

Visibly moved, Theysekens said backstage "I try not to think too much, I just follow my heart." A welcome emotional programme, indeed, which translated into a noteworthy start. In the future, Theyskens needs to infuse some more emotion in to the whole. This one felt a little dry.