There was something easier and sportier going on this season, but it was not enough of a departure from the past. 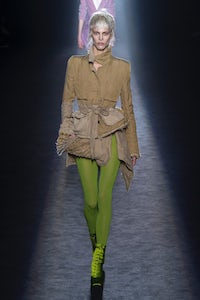 There was something easier and sportier going on this season, but it was not enough of a departure from the past.

PARIS, France — Again this season, the hair at Haider Ackermann's show looked like the models went crazy with a clipper. There is invariably something unhealthy about their shiny pallor, too. In fact, Ackermann's posse of powerful women can sometimes look plain ugly, which is actually strange, considering what a lover of beauty in its most decadent expressions the designer is. Ackermann needs to evolve his collection and the way he styles it. He's been stuck in the same place for too long, cutting mannish jackets in opulent brocades, keeping trousers skinny and punky, wrapping extra jackets around the hips.

Truth be told, there was something easier and sportier going on this season in the ultra-light windbreaker coats and parkas, in the shots of solid brights for slinky dresses and skinny pants worn with blousons, but it was not a significant enough departure from the past. The solution? Ackermann already has it. He should treat his womenswear as he does his menswear: mixing decadence and reality in equal measure. That might be a good start for next season. He could throw away the hair clipper too.