The designer’s strength lies in bringing a bit of fantasy to real clothes. 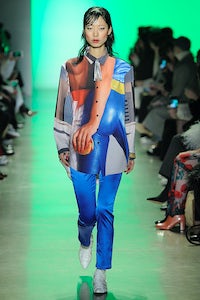 The designer’s strength lies in bringing a bit of fantasy to real clothes.

NEW YORK, United States — On the elevator heading up to designer Adam Selman’s show at Spring Studios, there were two young women dressed like Memphis Design groupies. “I’m sure some fashion girl will have a safety pin,” one said, fiddling with a loose button on her electric blue silk shirt. They were wearing real looks — yellow pumps, blood-orange and black leopard print trousers — that conveyed that they were indeed not “fashion girls,” trained by the hive to style themselves a certain way, but fashion obsessives, choosing pieces by instinct instead.

So it's no surprise that they made their way to Selman's show, as a refreshingly pure love of fashion drives his work. This season, he collaborated with the artist Cheyco Leidmann, whose colour-saturated photographs helped to define the look of the 1980s America. Those images, including a hand with cherry-lacquered nails grasping onto a piece of lime slime, were screen-printed onto tees and silk dresses, serving as hyper-real accents to Selman’s zipper-mad red patent minis and heart-sequined slips.

Selman's strength lies in his ability to bring a bit of fantasy to real clothes. That is, nice-fitting jeans rendered in sheer, zebra-printed burnout velvet, a blue satin jumpsuit cinched with heart-accented buckles, or a color-blocked silk shirt dress with matching bloomers on glorious display. As for that dressed-to-the-nines pair in the elevator? They had plenty of fabulous, unselfconscious things to show up for here. Hive-mind, begone.