The designer mined Celine's 70s archives to mark a new era in fashion. 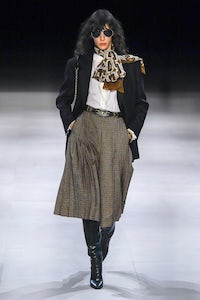 The designer mined Celine's 70s archives to mark a new era in fashion.

PARIS, France — Celine has always been about a certain kind of woman: modern, in control, quirky, affluent, powerful, and yet averse to showing off; a little masculine, perhaps. Forget that. Today, in his giant black box, mounted in front of the Hôtel des Invalides, star designer Hedi Slimane unveiled his new vision of the Celine woman. She was not the sultry, even sleazy, rock chick of last season. That was a false start. Hail the new Celine girl: modern — circa 1975 — and without a doubt very Celine… as in straight from the archives. She came so fully-formed as an idea that she literally landed on the catwalk in a flying box, as if from a time machine. You know, fashion has its own peculiar time-zone, which regularly hails the future by reverting to the past, and vice-versa. So, this vision came as a surprise, but only to a point.

Let's break down the template, as Slimane’s latest turn will surely generate waves across the industry. His woman is very Parisian, liberated but bourgeois. She lives on the Left Bank and takes philosophy classes at the Sorbonne. She has just discovered the ease of ready-to-wear and enjoys clothing that’s much more in sync with the way the world lives today (it's 1975, remember) than her mother's wardrobe. She wears silk blouses and cardigans with pleated skirts or pleated trousers, skirts that cover the knee. Not that her legs are on show: she's all for wedge boots, which she pairs with said skirts, skinny jeans and printed silk shirtdresses. Her choice of outerwear is precise: capes, blousons, coats. Oh, she wears a small shoulder bag, and shields her eyes behind oversized aviators. That's it; nothing more, nothing less.

That's what you get with Slimane: one single idea, honed to perfection, hammered ad nauseam until you get it. The process of getting it is not particularly conceptual or difficult, truth be told, just a matter of taste. You either like it or you don’t, but it is always quite literal.

That’s ultimately what made today’s show a winner. In a moment when the streetwear trend is waning and elegance is making a comeback, Slimane found the magic cusp that marked a new era in fashion. Yes, it was more than forty years ago. But nostalgia is one of Slimane's defining traits: the allure of the unreachable, be it extreme youth or a forgotten moment in time. He turns it all into something you can and want to buy.