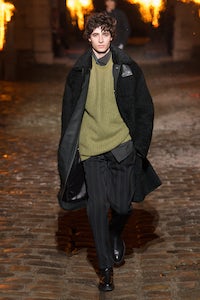 PARIS, France — Hermès took over the cloisters of Hôtel de l'Artillerie for its show today, and literally set the place on fire. There were giant bonfires in the courtyard which the models passed through. It was quite a scene to behold, and a sign that something was finally happening in the quiet world of Hermès' menswear.

Men's fashion, especially in the upper echelons of sophisticated classicism, is slow by definition, but Hermès has always been even slower than normal, almost to the point of stillness. It's the slightest and subtlest details that make the difference from one season to the next. That's Véronique Nichanian's forte after all: she manages timeless masculine chic like no other. This time, though, she felt the need for a bolder move and the collection hugely benefited.

The voluminous outerwear was particularly noteworthy; done in Hermes leathers and luscious fabrics, it added a well deserved youthful elan. There were beautiful intarsia knits and slouchy flannel trousers, too, while eveningwear was lustrous and shiny. All in all, it felt like a step forward — a much-needed one.