"Up to Date" for the Emporio man on the move. 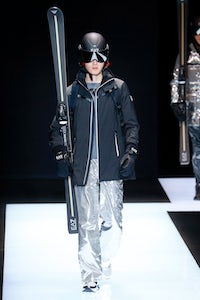 "Up to Date" for the Emporio man on the move.

MILAN, Italy — Giorgio Armani has one inviolable asset. It’s the thing that sustains him through collections that are occasionally less then stellar. No one else makes clothes that look so reach-out-and-touch. The Emporio collection he showed on Monday was a soothing symphony in grey: tweed, Prince of Wales check, bouclé, marl, with just a smattering of cloudy blue and forest green. The pile of the fabrics loaned them a soft blurriness, an obvious sensuality which was emphasised by the models, who walked with what is known in the makeup industry as a smoky eye.

There is always technology at play with Armani — here, laser-cut tailoring, leather appliqués like a Starship Trooper’s insignia, a geometry of bonded strips and seams that defined shapes. At the same time,  he placed a new emphasis on denim in generous volumes that suggested old-world workwear. Images of unambiguous masculinity have been on Milan’s mind this season (always assuming you picture cowboys as unambiguous) and Armani’s baggy denims had a quiet authority. At the same time, his men clearly needed to be able to move in a hurry.

Perhaps that was why the collection was labelled Up to Date. The bags the models carried were capacious to a fault (one backpack was positively Brobdingnagian). And was that a passport holder one of them was wearing round his neck? 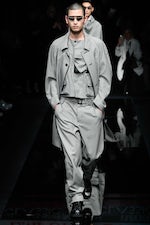 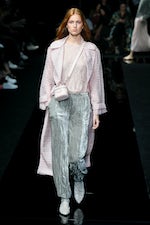 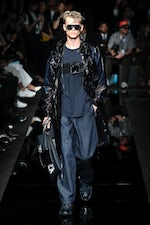 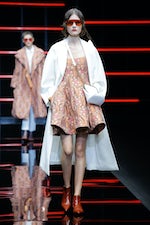