The models felt like the kind of students who might fancy themselves as urban guerrillas when the Revolution came. 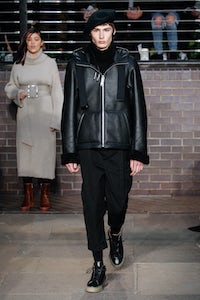 The models felt like the kind of students who might fancy themselves as urban guerrillas when the Revolution came.

LONDON, United Kingdom — Mihara Yasuhiro’s men’s shows in Paris were some of the most thoughtful, beautifully realised presentations of the last ten years, and, in that at least, not much has changed now he has started showing in London. His latest show was staged among the greenery of the Barbican Observatory, to an intimate, sensuous live soundtrack by singer Maia Barouh and percussionist Leo Komazawa.

Their performance smartly embodied the balance between the simple and the profound that Mihara claimed to be looking for in his designs. If that sounds like a tall order, he’s actually managed to do it in the past, because he’s created clothes with so much fascinating character. Clothes that feel like they’ve already lived a life. That seductive thread of seasoned complexity was missing here. In their berets and simple, sombre duds, the boys and girls felt like the kind of students who might fancy themselves as urban guerrillas when the Revolution came. Actually, that’s a Mihara-ready sub-text. Today, the world’s taken a turn for the disturbing; the young are our only hope for tomorrow. And that’s just what the coats said at show’s end: THIS IS TOMORROW, picked out in coloured fluff. Maybe not so simple after all.