Nothing reverberated with the shock of the new but the notion of creative circularity wouldn’t go amiss. 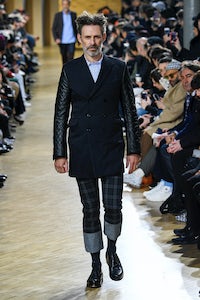 Nothing reverberated with the shock of the new but the notion of creative circularity wouldn’t go amiss.

PARIS, France — The search for sustainability is understandably fashion’s obsession. It’s one of the most significant ways that the industry can hang on to any kind of relevance. But Junya Watanabe approached the issue from his own point of view with his latest men’s presentation. “I designed this collection thinking of people of my generation or older,” he wrote in his post-show notes. You could say human sustainability was his theme.

The substance of the collection was very much a reiteration of familiar Watanabe ideas. So we saw the classic hybrid tailoring, including wool jackets with leather, knit or denim sleeves, others with a back panel of velvet, brocade, even puffa quilting. There were the classic striped or checked cotton shirts, in collaboration with Turnbull&Asser. There were the patch-worked denims, the odd piece of sensational outerwear (plus the outdoorsy detailing he loves). Nothing reverberated with the shock of the new, but, in keeping with a theme of sustainability, the notion of creative circularity wouldn’t go amiss.

But if the substance of the show was familiar, its style was much less so. In an age when age is the last frontier on fashion runways, it was a pleasant surprise to see some well-seasoned greybeards doing Watanabe full justice with their silver swagger (that’s the title he gave the collection, by the way). As they confidently strode the catwalk, the glint of humour in their eyes a distinct contrast to the usual fixed stare, they were a healthy reminder of how character enlivens clothes, and how clothes express character. Bryan Ferry and Iggy Pop supplied an ideal aural complement.

As for the sustainability message? While the designer was doing his backstage meet-and-greet, his models were changing all around him and it was hard not to clock that these men in their sixth, seventh, maybe even eighth decades were in great shape. Watanabe couldn’t have wished for better backup. Life goes on — it’s an irrefutable fact that fashion, hopelessly obsessed with the transience of youth, occasionally loses track of.