The absence of big names like Tom Ford and Ralph Lauren means young designers have an opportunity this week. They shouldn’t squander it.

The absence of big names like Tom Ford and Ralph Lauren means young designers have an opportunity this week. They shouldn’t squander it.

NEW YORK, United States — On Friday evening, just as the first guests stepped their strappy sandals into Milk Studios in Hollywood for Tom Ford’s runway show, a sure-to-be-shiny warmup to Sunday's Oscars, a young designer 2,800 miles away used the star designer’s absence to her advantage.

Prisca Vera Franchetti, raised in Rome with an American passport, has lived in New York for the past eight years, launching her label, Priscavera, in 2015. A part of the Lower East Side crowd making New York’s independent fashion scene worth following right now, she’s one of the best at transforming sort-of tacky ideas — plastic pants, gauche prints — into something fairly sophisticated, often with a tinge of eroticism. This season, for instance, she developed a long-line silk suit with just enough structure to deliver on the “professional cool” she promised. 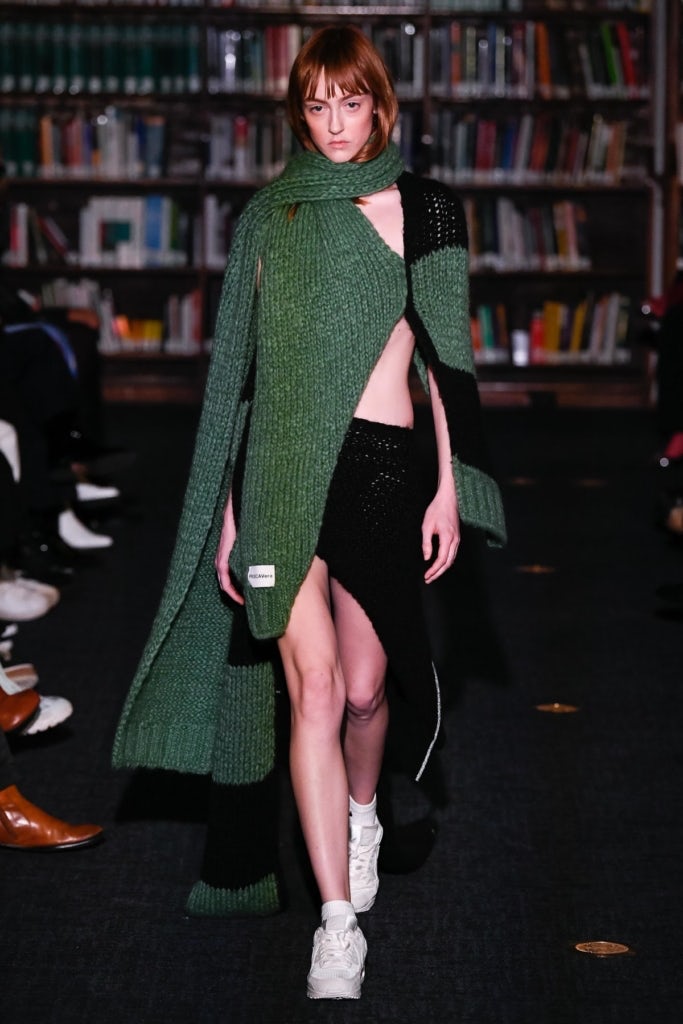 Franchetti’s collection is sold at cool stores, and she has her own e-commerce. She doesn’t have to have a show. (I first saw her wares in a shop, not on the runway.) But this season, with so many big names gone from the New York Fashion Week calendar, her runway presentation, staged in the second-oldest library in New York City — that yes, smelled wonderfully of old books — became the hot Friday night ticket, replacing Jeremy Scott as the evening’s party favour. On models, the collection was sensual and fluid, everything styled with bouncy Nike sneakers, even a slinky silver dress.

Today, Franchetti believes, experimentation is rewarded. “American sportswear belongs a bit in the past,” she said at a preview on Wednesday. Whether Franchetti has “it” — that combination of creative energy and business savvy that allows an independent designer to survive — isn’t clear yet. But being in New York, where the rules of fashion have dissolved after a decade of store closures and brand failures, gives her the space to work it out.

Who else is capitalising on the chaos? Laura Kim and Fernando Garcia, who design both Oscar de la Renta and their own collection, Monse, decided to bring the latter back to the runway after a multi-season hiatus. They officially opened New York Fashion Week on Friday, using elements of punk —tartans, sprays of safety pins, wooly mohair — to further communicate Monse’s very clear identity, based on deconstructed menswear and Kim’s personal sense of style.

The duo love a Jekyll-Hyde moment: a trench sliced in half to reveal a pleated skirt; a heavily sequined collar creeping out from under an off-the-shoulder dress cut in a grey pinstripe. Those looks have commercial appeal, but the straight-on punk costuming read hokey. The question is how big Kim and Garcia want Monse to be, and if there is a big enough potential audience for their wares to get there. In order to keep people interested, they need to evolve it further, and not rely too much on clichéd tropes. Punk feels more punk when it isn't presented so literally. 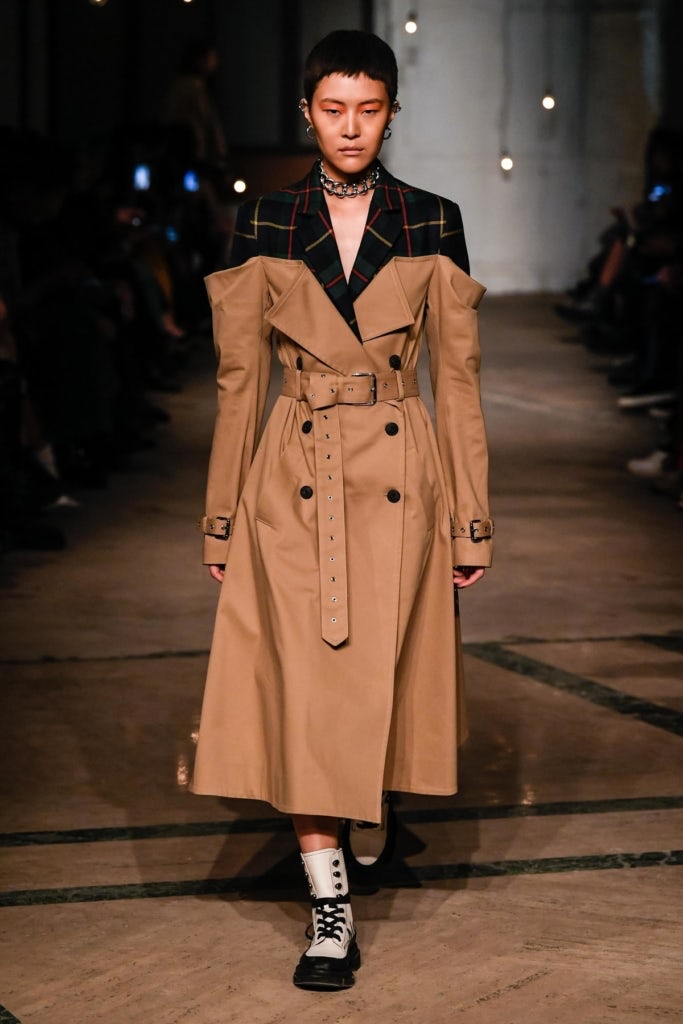 Marcus Wainwright, whose brand Rag & Bone is about a decade ahead of Monse, has not been shy about his billion-dollar-brand ambitions. But not so long ago, he also told me that he thought he might never stage a runway show again. And yet, for the past two seasons, he has done just that, albeit an amped-up version more focused on performance than apparel. 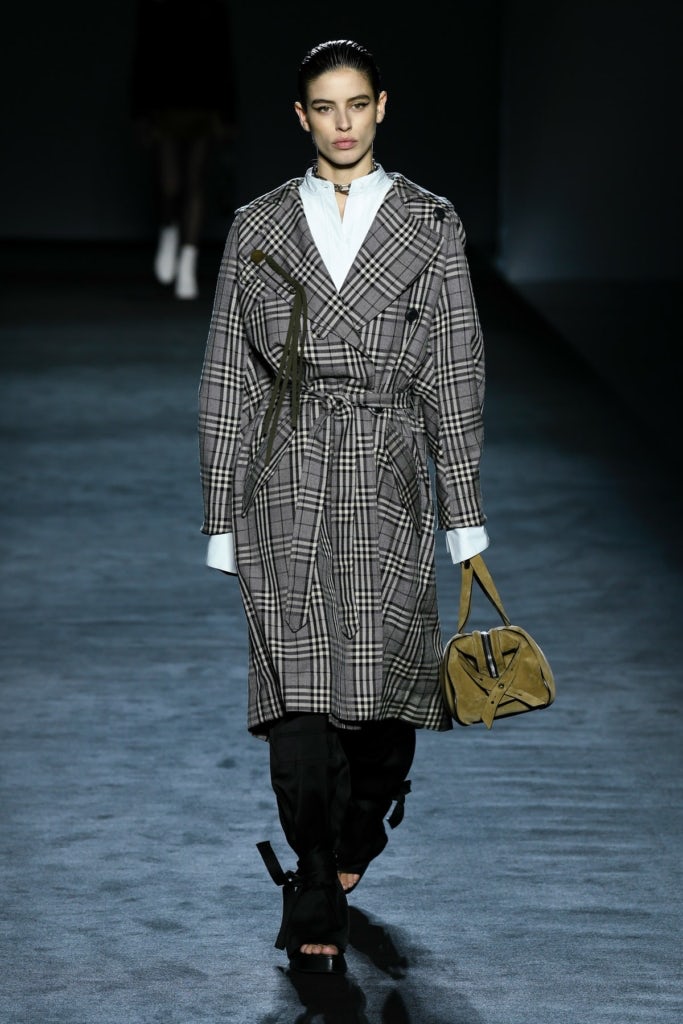 “Not doing a show was phenomenal because it opened our eyes to how myopic we were being about fashion in general,” he said on Friday afternoon of his time spent away from the catwalk. “But it’s very hard to get across a seasonal point of view, to tell a plainly obvious story about what a brand stands for...with a dinner.”

Did he pull it off this time? The event's trick pony were two big screens projecting a digitised sequence of a city scape and what looked like a DNA helix. It was jarring, and at times menacing, reminding me of a spin class I used to take in a fitness studio kitted out with an IMAX screen. (It has, perhaps unsurprisingly, since closed.)

The clothes were more considered than in recent seasons, reflecting the dystopian backdrop with dried-out materials and army ponchos. There were some great jackets for both men and women that felt want-able, sometimes a little special. But the overall package didn't deliver the media moment Wainright was after. While several publications live-streamed the show, and you could view it on Rag & Bone's own website, these types of projects only work when the content's purpose is undeniable.

The Rag & Bone customer has always been so obvious: the young, white-collar professional who wants to look cooler than their coworker. But now that customer has more options. Wainright's on the right rack, but he needs to get a better grip on the story.

Still, any story may be best told in the wide-open field that is currently New York Fashion Week. At her pre-show dinner on Wednesday, Australian designer Nicky Zimmermann, whose almost-30-year-old business has expanded rapidly over the past few years, explained that no other city has been so welcoming to her and her sister, who will show their collection on Monday. (The dedication was reflected in the crowd, virtually bathing in a sea of her floral frills.) “We have an amazingly loyal American clientele,” she said. “Maybe one day we’ll do something else, but for us, New York is a home away from home and we feel very close to everybody we do business with here.”

Rachel Comey, though, has really got it right. Like Zimmerman, she’s been around for what feels like “forever” in fashion-brand years: 2021 will mark her 20th in business. But her brand has never been more popular...or cool. On Thursday, she hosted a small salon at chef Marie-Aude Rose's low-lit French restaurant La Mercerie, where her fall collection was shown in between courses. Justin Vivian Bond and Nath Ann Carrera did the music, while writer Aminatou Sow and Lourdes Rivera from the Center for Reproductive Rights spoke on friendship and public policy, respectively. They each also shared things about their personal relationship with Comey and her designs. By the time large vats of chocolate pudding were served, guests were slinking up to the mic, telling their own stories of, as Rivera put it, “the beauty and strength of Rachel’s clothes.”

Comey began hosting dinner shows intermittently a few years back, but she has managed to keep them feeling original. Most of the people in the audience are her friends and customers. (I was seated next to the writer Zadie Smith and her crew, who were placing mental orders as the models squeezed by us.)

Many of them are also famous — Michael Stipe, Ryan McGinley, Annabella Sciorra and Cindy Sherman were there — although this doesn’t feel like a celebrity wrangling, but instead a dream dinner party. (The actress Molly Ringwald relayed a chance meeting with Comey at yoga.) 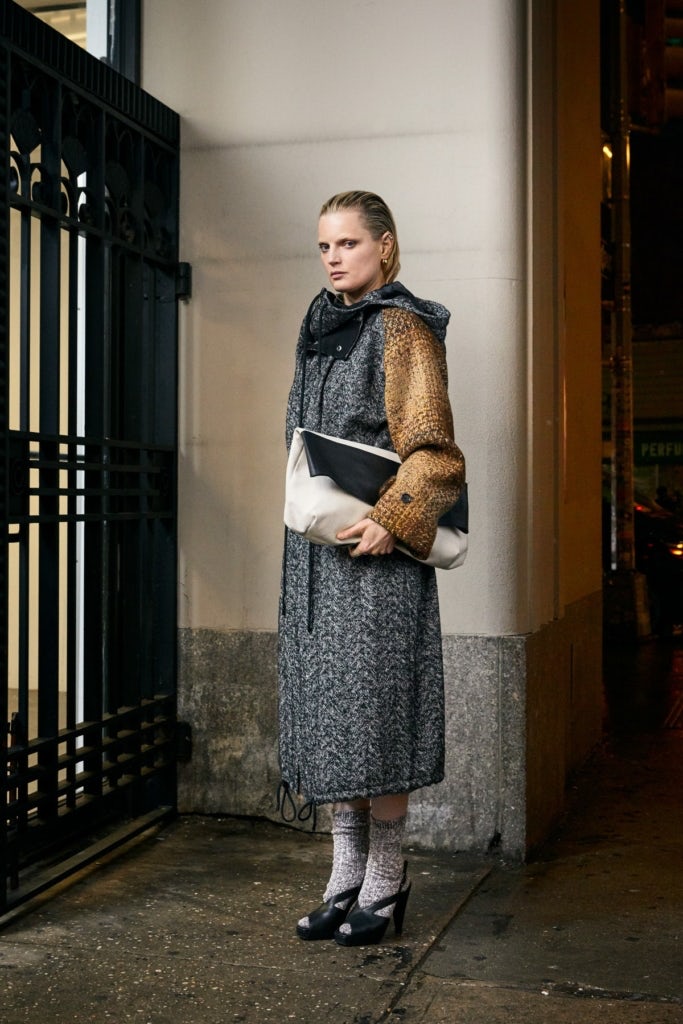 How does Comey manage it? The collection, which emphasised bundling and adornment, with paillettes decorating the hips and a spoon hammered into a necklace gently choking the collar bone, was one of her strongest in recent years. Although she doesn’t seem to be trying to outdo herself each season, there is continued evolution. I asked her how she remains so creative after all these years, and she explained that it may have something to do with how conservative she’s been in other ways.

For the first six years she was in business, she maintained another job and was her company’s only employee. She has also remained financially independent, choosing to manufacture her clothes locally, and only opening her first store after 13 years in business. (In February, she’ll test out retail in Europe with a temporary shop in Paris.) It’s not like it has always been easy. Building an independent business is scary and hard, and it is next-to-impossible not to screw up. But her resilience has been rewarded with creative freedom.

As the traditional fashion system continues to falter, young designers, including Priscaver's Franchetti, should take inspiration from the likes of Comey.