Reality is back, bringing designer fashion closer to the real world, reports Angelo Flaccavento from the Milan men's shows.

Reality is back, bringing designer fashion closer to the real world, reports Angelo Flaccavento from the Milan men's shows.

MILAN, Italy — A crepuscular atmosphere persisted over the Milan fashion week which closed Tuesday. There was both a sense of anticipation and a streak of melancholy running through the proceedings — and not only because modesty and the everyday seemed the main preoccupation of designers old and new. The fashion system finds itself in flux, but it's still hard to see where it’s all leading. Old ways are clearly fading away, a bit like the crumbling of an empire, hence the feeling of witnessing the twilight of a known world. Of course, there’s little doubt that traditional fashion shows are broken. In a world of rapid image consumption, they are too slow, triggering a kind of Hamletic doubt — To be, or not to be? — which will take some time to answer. 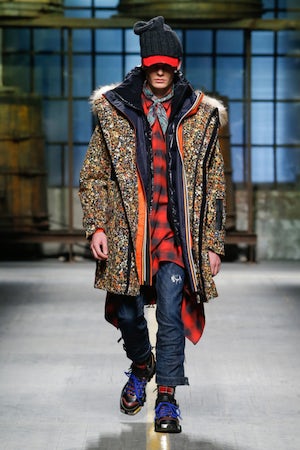 This season, we saw the unmistakable rise of integrated men’s and women’s shows. At what was once Milan’s traditional men’s week there were quite a few mixed gender shows — DSquared2, Damir Doma, County of Milan —  with more to come during the the city’s traditional women’s week in February, with Gucci and Bottega Veneta leading the pack. But this is partially what contributed to feeling of twilight this week: the audience was strange, with many of the big players missing. What’s more, integrated men’s and women’s shows, while certainly budget-friendly, can dilute aesthetic impact, especially in the hands of designers who lack a fierce vision or impactful narrative.

Gaultier and Giorgio Armani were the ab antiquo originators here, but their message was about couples: identical looks as a radical statement. Raf Simons has done this in the past as well. So does Demna Gvasalia today. In these cases, however, androgny is part of the game. So it is for Damir Doma, one of the first to opt for such a model in Milan and one of the city’s most brutally poetic fresh voices. Marcelo Burlon, too, has been a herald of the unisex show from day one with his County of Milan label: the approach suits his boldly graphic, multicultural take on urbanwear. 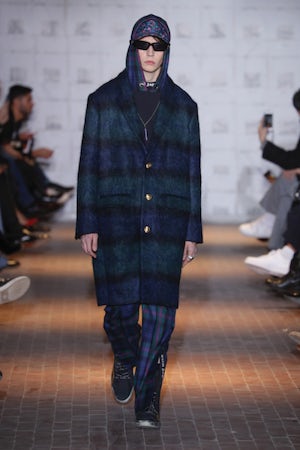 Speaking of which, newcomer Francesco Ragazzi, the mastermind behind Palm Angels — another alumnus of the evolved, unisex streetwear school of thought — did a wonderful job in bringing a bit of underground energy to an otherwise bourgeois Milan. The seeds of his vision are clear — no matter what, Raf Simon's urban protest shows of the early 2000s are more relevant today than they were back in the day — but he has guts and taste, all merging with the skills of a punchy storyteller.

Things did not go equally well elsewhere, however. At DSquared2, for instance, the “glunge” — as in glamour plus grunge, and thanks to Rick Owens for coming up with the word — theme carried over coherently from menswear to womenwear, even though the men looked like punks on a trip to Aspen, while the women came across as off-duty glamazons and the overall result felt tepid. These were odd couplings, not couples.

Milan's melancholy was also a matter of generational turnover, something that in the Bel Paese looks harder and harder to make happen.With the calendar getting thin to the point of transparency, the Camera della Moda made its best possible effort to fill the voids with emerging talent. Yet the results were mixed. 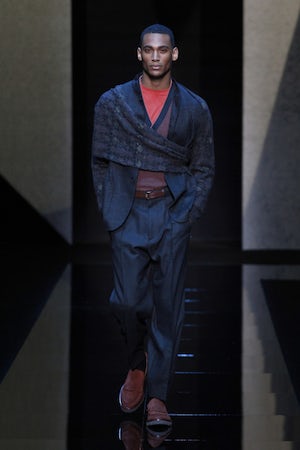 It was not simply a matter of talent. Both Federico Curradi, relatively young but with a noteworthy CV, and Malibu 1992, the offspring of polymath and local nightlife star Dorian, had potential. Curradi, an ebullient stalwart, excels at poetic, liquid tailoring and works exclusively with local mills and factories, for both creative and ethical reasons. Dorian, on the other hand, aims at creating fashions with a subcultural tingle, just as Gosha Rubchinskiy does. His posse of clubbers wore performance outerwear over assorted clubwear, but he should have worked more on the contrast.

What did not work, for him as well as for Curradi, however, was the venue, provided by the Camera della Moda: it was too generic and, as such, at risk of erasing each designers' personality and message. The same applies to Yoshikubo, Motoguo and Consistence, the international brands selected in an elan of support by Giorgio Armani. Not an Italian in sight, mind you. This in the temple of Made in Italy, which reveals a lot about the state of the Italian fashion system.

Despite Camera della Moda's commitment to the cause, there appeared to be a lack of noteworthy fresh talent and this is honestly a pity. Or maybe it is time to revise the criteria. Because there is indeed talent to be found: the fiercely determined Loris Messina and Simone Rizzo, aka Sunnei, are Milan's finest at the moment, their ironic take on everyday staples charged with a childish zing of energy which is as light and reassuring as a breeze. And cute, because cute is good, too, especially in the context of everyday dressing. 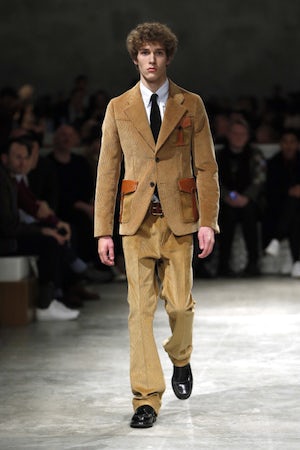 The two benefited from the Camera della Moda’s support, but took things in their own hands with a winning jolt of determination.Which brings us back to the sense of normality, modesty and humility which is the real news to come out of the Milan shows. Finally, even the fashion world, which is based on make believe par excellence, is coming to terms with the oversaturated urge for storytelling. Trying too hard is not interesting anymore. Reality is back, bringing designer fashion closer to the real world, without sacrificing invention.

From Miuccia Prada's literal yet captivating take on radical chic to Armani's ode to sartorial softness; from Zegna Couture's crafed modernity to Fendi's magnificant sense of pop splashed onto sportswear; MSGM's preppy to Missoni's nonchalance, it was all about wearability, ease and performance.

The danger of boredom is, of course, omnipresent, but that is a more minor concern. Because normality, today, actually comes across as rebellious. Apropos, rebellion loomed large in Milan: hitting the streets à la No.21 or Palm Angels, reading Marx à la Prada; or going psychdelic à la Marni. That was the only way out of the gloom, an antidote to the general sadness hovering above all of us. Just don't call it escapism.