From Prada to Gucci, reductionism, simplicity and focus are back in fashion.

From Prada to Gucci, reductionism, simplicity and focus are back in fashion.

MILAN, Italy — In Milan, a reshuffled schedule brought a little frisson to the shows, setting the tone right from the start for an energetic fashion week. And yet: “There is too much of everything,” said Miuccia Prada on the first day of proceedings. She’s absolutely right. There is too much fashion for sure, most of it not worthy of words. There’s the never-ending flood of Instagrams for that.

Fashion is unsustainable, that's for sure. Carbon neutral shows are a good step but the current rhetoric on sustainability is more storytelling than anything else. Green Carpet Fashion Awards, anyone? It's the sheer amount of stuff that's being produced every season that is the underlying problem and, here, a reassessment would be good for creativity as well as the environment.

Who needs so much stuff? What for? Why has designer fashion adopted the fast fashion cycle? “We would all need to stop for good,” was Mrs. Prada’s absurdist answer. “But we can't,” she swiftly added. Surely some ruthless editing is the solution. 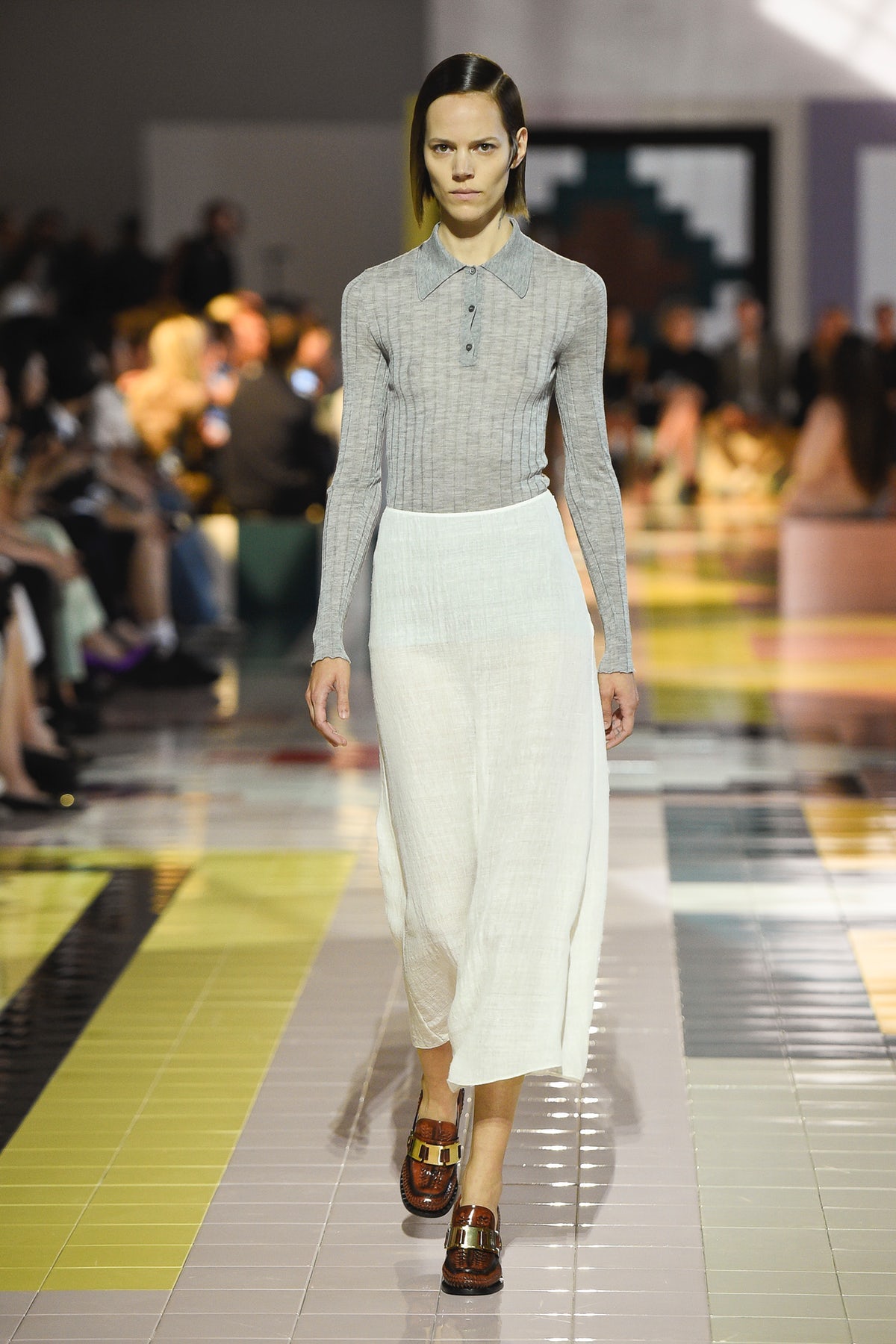 In the case of Marco Zanini, whose self-financed Zanini collection emerged all of a sudden last season and has grown into a quiet force to be reckoned with, less was definitely more. And yet, with just three racks of clothing presented in the classy, intimate, Swedish-inflected setting of his own apartment, he delivered a precise punch. Nothing needlessly showy, or stupidly abstruse — just soulful pieces that are superbly made, elegant and easy to wear, seen through the prism of Zanini's immaculate taste. In other words, ‘Made in Italy’ at its best: not-for-Instagram daywear imbued with an authenticity that elevated it way above mere product.

There was similar stress on chic ease and authenticity at Agnona, where Simon Holloway keeps forging his own understated path, one wrought in simple, immaculate lines and gorgeously luxurious fabrics. This season the goings had an early ‘80s Milanese vibe — think strong shoulders, beige and pointy flats — that was a clear nod at the quintessential Italian look but avoided the trap of nostalgia. It felt timely.

Another master purist, who is largely underrated, is Gabriele Colangelo, both with his namesake label and Giada. While the latter — a Milanese brand owned by Chinese group Redstone — is targeting a grown-up audience of wealthy working women, whom Colangelo dresses in coiling layers of cashmere and leather, his namesake label is a feast of textile experimentation and pure design that truly deserves notice. Daniele Calcaterra, too, is a purveyor of luxuriously airy less-is-more who is emerging as an interesting designer to follow.

But of course, it was Mrs. Prada who lead the reductionist bunch, proposing simplicity as the way forward while winking at her own ‘90s past, without playing the archive replica game. There were echoes of the Prada heyday in the elongated silhouettes, in the pure tailoring, in the general sombreness; but the rest was a pure investigation of the moment. Simplicity is not minimalism: it comes with a soft hand, not with the harshness and moralising of stripping everything to the bare essence. Mrs Prada did not refuse decoration but used it with a light hand. The hats and the jewellery were probably de trop — pointing in a let's-make-it-strange Gucci-like direction — but this was Prada regaining a sense of focus and significance that's been lacking for a few seasons. 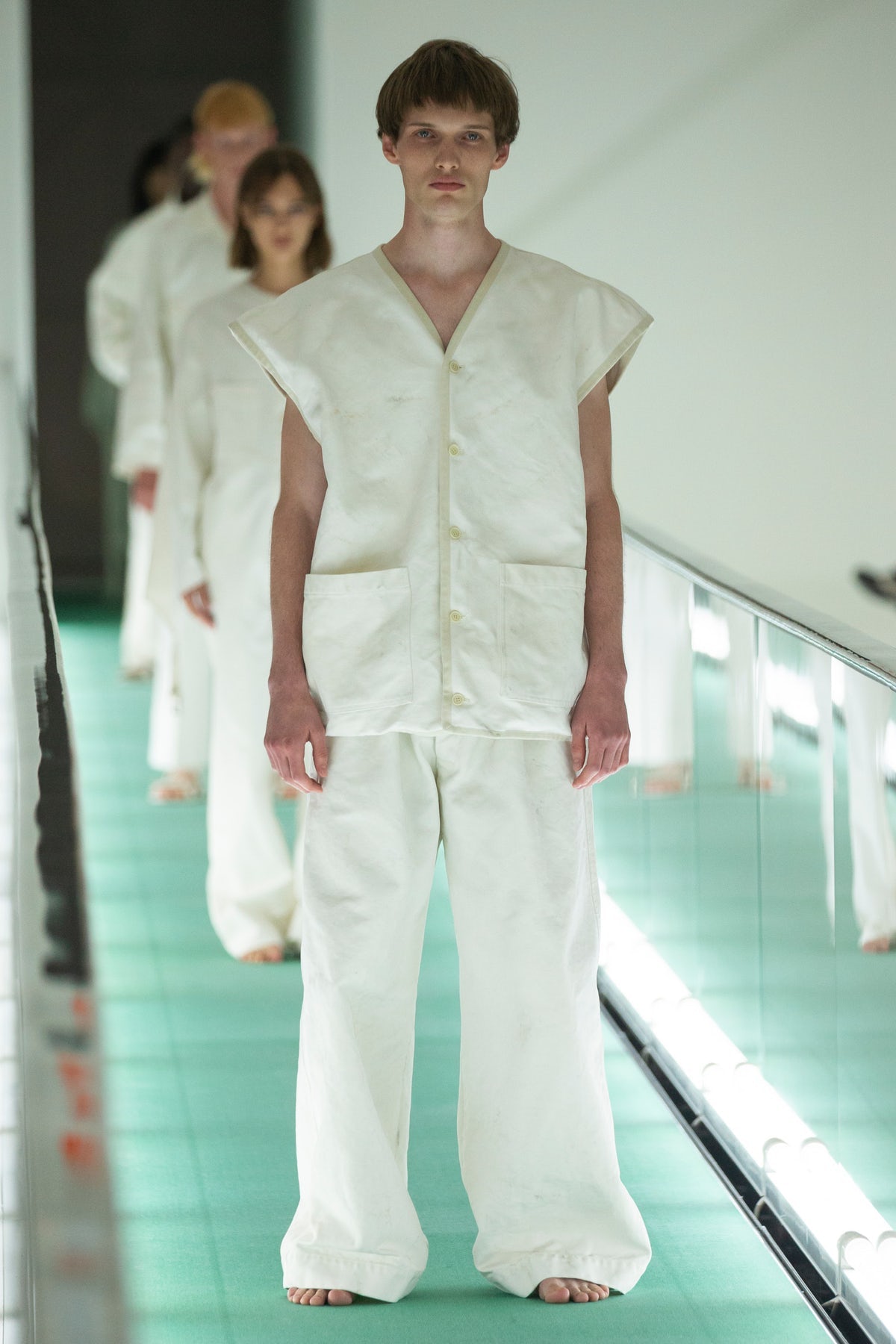 The Milanese call to action — doing less — was truly pervasive, but not at all monotone. Everyone responded according to personal codes. Yet, if even a die-hard hoarder of signifiers and enthusiast for decoration like Alessandro Michele, the man who single-handedly started the neo-maximalist craze, opts for restraint, his own way — upping the ante to the max on sex while doing away with the patches — one just has to sit down and take notice. With this show, Michele cleverly managed to move Gucci to new shores while avoiding a complete about-turn. It was another Gucci, evidently, but you felt continuity.

Michele looked at a peculiar moment in the recent history of the house — the sex-charged, slightly fetishistic Tom Ford ‘90s — but also the Dolce & Gabbana early ‘90s, when Madonna released ‘Sex’ and was truly on a mission to épater la bourgeoisie, turning his very own beautiful freaks, so far rather uninterested in sex, into sexually voracious beings. He did so by delving all the way down into the cliché, from the transparencies to the slip-dresses to the horsewhips, playing a wonderfully perverted game.

With Michele, you never know how much being literal is deliberate or just accidental, and this keeps you guessing and engaged. With this show, for sure, he made it clear that he has more than one trick up his sleeve and can create as mean a silhouette as the mastery of collaging references. 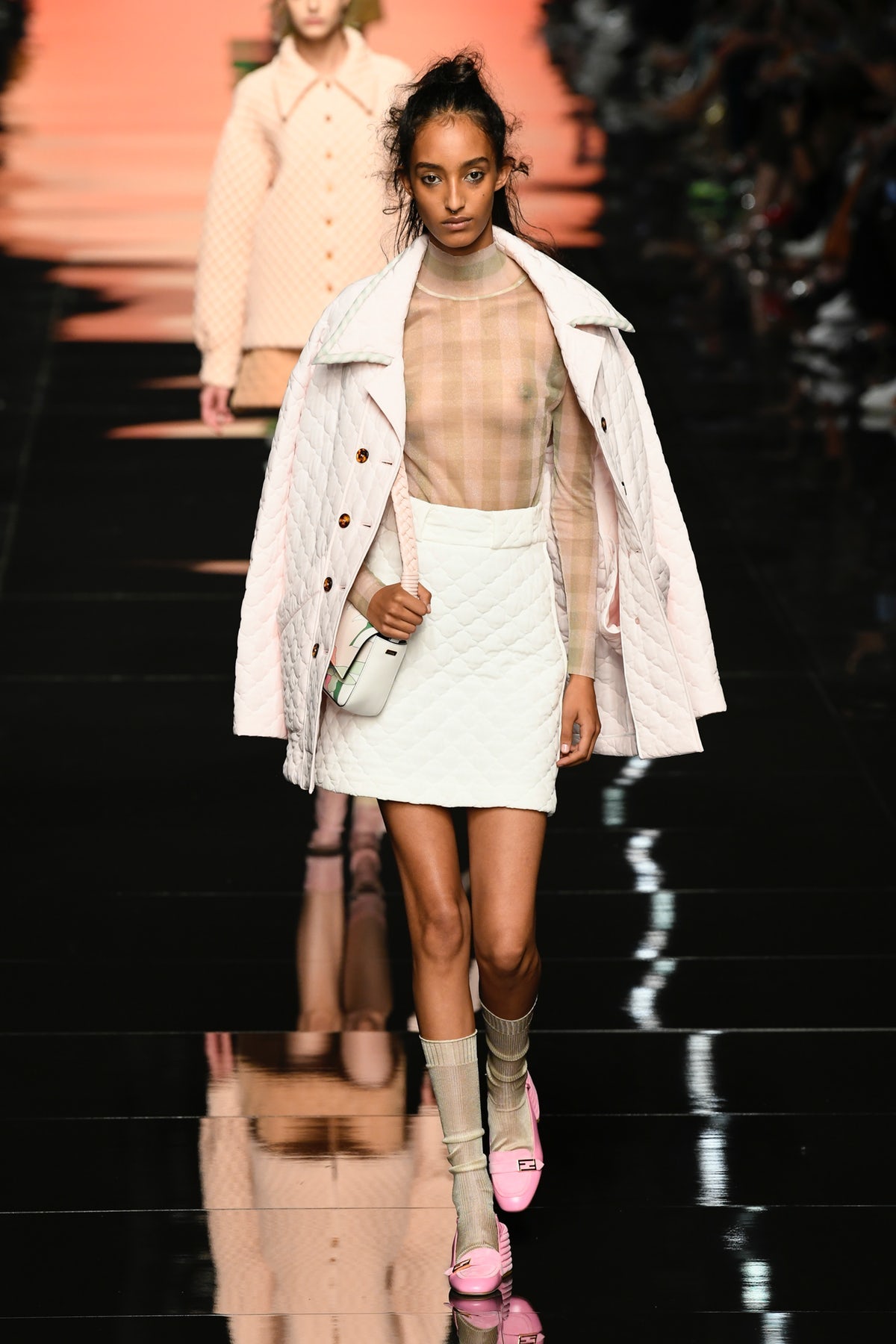 It was the beginning of a new era at Fendi with Silvia Venturini at the creative helm, which made for a very interesting shot of feminine pragmatism in the house where nothing is impossible. This was clearly just a first step, so a few adjustments will be welcomed, but the idea of a Fendi woman as a real being living a real life, not a supreme fashion fantasy, is right on, not least because the house’s wonderful fashion artisanship elevates it all to another level.

At Bottega Veneta, Daniel Lee did away with the German Expressionism drama of last season and delivered some interesting plain pieces — with a stress on process and craft — that are probably not enough to keep up with the hype that's being built around him, but are nonetheless sure to keep Bottega's desirability factor high. 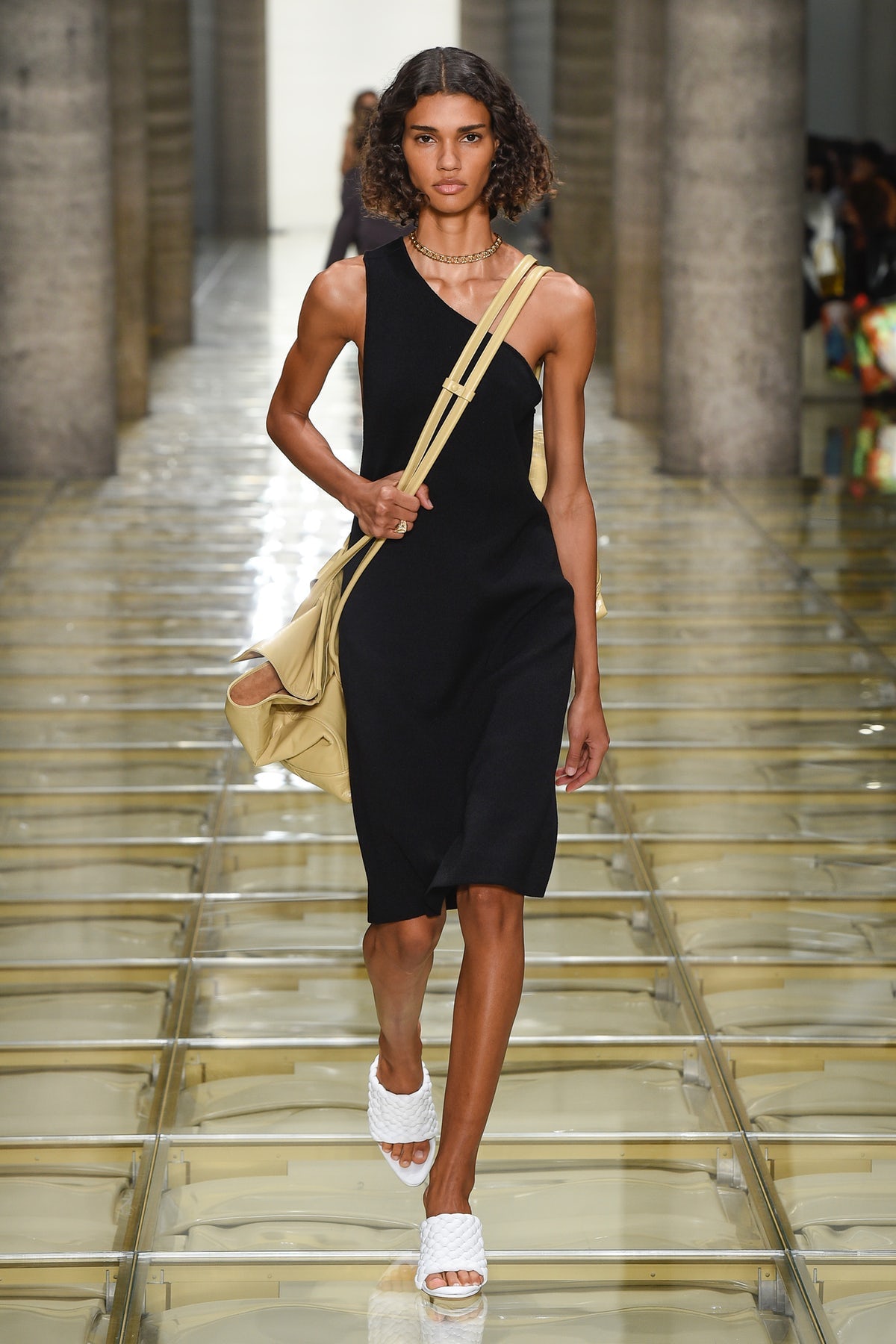 Stripped away of all the hoopla and the Instagram craze for the Jungle dress and Jennifer Lopez wearing it on the catwalk, even the Versace collection had the powerful and empowering feeling that comes from streamlining things of needless excess. It was the curvaceous black in fact that truly stole the show, together with the denim and the humongous warrior shoulders. Sure, Donatella Versace can hardly be called a reductionist, but this collection had a fast-forwarding focus and a sense of presence that was miles ahead of the archival nostalgia.

The same kind of focus was lacking at Missoni, where a collection of beautiful pieces was layered to the extent that clarity of message proved elusive. It is a pity: with fashions so intricate and artistic, going heavy on the styling can be a killer. At Marni, too, things verged on the chaotic, but there was a childish kind of energy that felt authentic and ultimately worked.

In sum, this was not the most exciting season for Milan, but it had substance and depth. Now, if only Milan would take a less-is-more approach to the calendar.