A bit brutal, full of product, and looking backward to move forward: the Versace collection summed up the spirit of the season perfectly, reports Angelo Flaccavento.

A bit brutal, full of product, and looking backward to move forward: the Versace collection summed up the spirit of the season perfectly, reports Angelo Flaccavento.

MILAN, Italy —  The Milan fashion week that closed yesterday was kissed by bright sunshine and balmy temperatures, which put attendees in a good mood, despite the rather short, but crammed calendar. The truth is, the Milan schedule needs extending, vigorous editing and a substantial reshuffling, so as not to have crazy days filled to the brims, and then slow days during which nothing much happens. Of course, such a shift will need to be led by the Camera della Moda, endorsed by Italian brands and accepted by foreign press and buyers, who seem loathe to spend more time than necessary in Milan, which is a shame, as the city is going through something of a cultural renaissance in everything from fashion to food to clubbing.

This said, when it comes to fashion, Milan is no Paris. Over the last decade, Italian fashion has not delivered precious few genuine auteurs, young or established. And this season, the chorus of the valid included the usual suspects: Miuccia Prada, Donatella Versace and Fendi, where Karl Lagerfeld's last effort was a magnificent lesson in class, invention and wit. Then, there was Giorgio Armani. With the old world crumbling, King George's dedication to his own purist vision is quite heroic, regardless of his relevance, as he operates in his own big niche. Add to the list: Gucci’s Alessandro Michele, Francesco Risso of Marni and Ferragamo's Paul Andrew, as well as Daniel Lee for Bottega Veneta. Plus, the designers that make up the truly genius Moncler Genius roster.

There was little in the way of new voices, but it was interesting to witness the rise of the young label Act N.1, which is run by a Georgian and a Chinese — Galib Gassanoff and Luca Lin — who blend a metropolitan, abrasive aesthetic much in the vein of Vetements with a refined fashion sensibility: the sophisticated and the rough, the masculine and the feminine, letting contrasts come together jaggedly. Gassanoff and Lin attach socio-political narratives to their shows — this season it was a tale of feminine empowerment — which are a little naive in metaphorical terms, but heartfelt: a forgivable misstep in consideration of their spontaneity and authenticity and given the fact that they deliver substantial clothing. 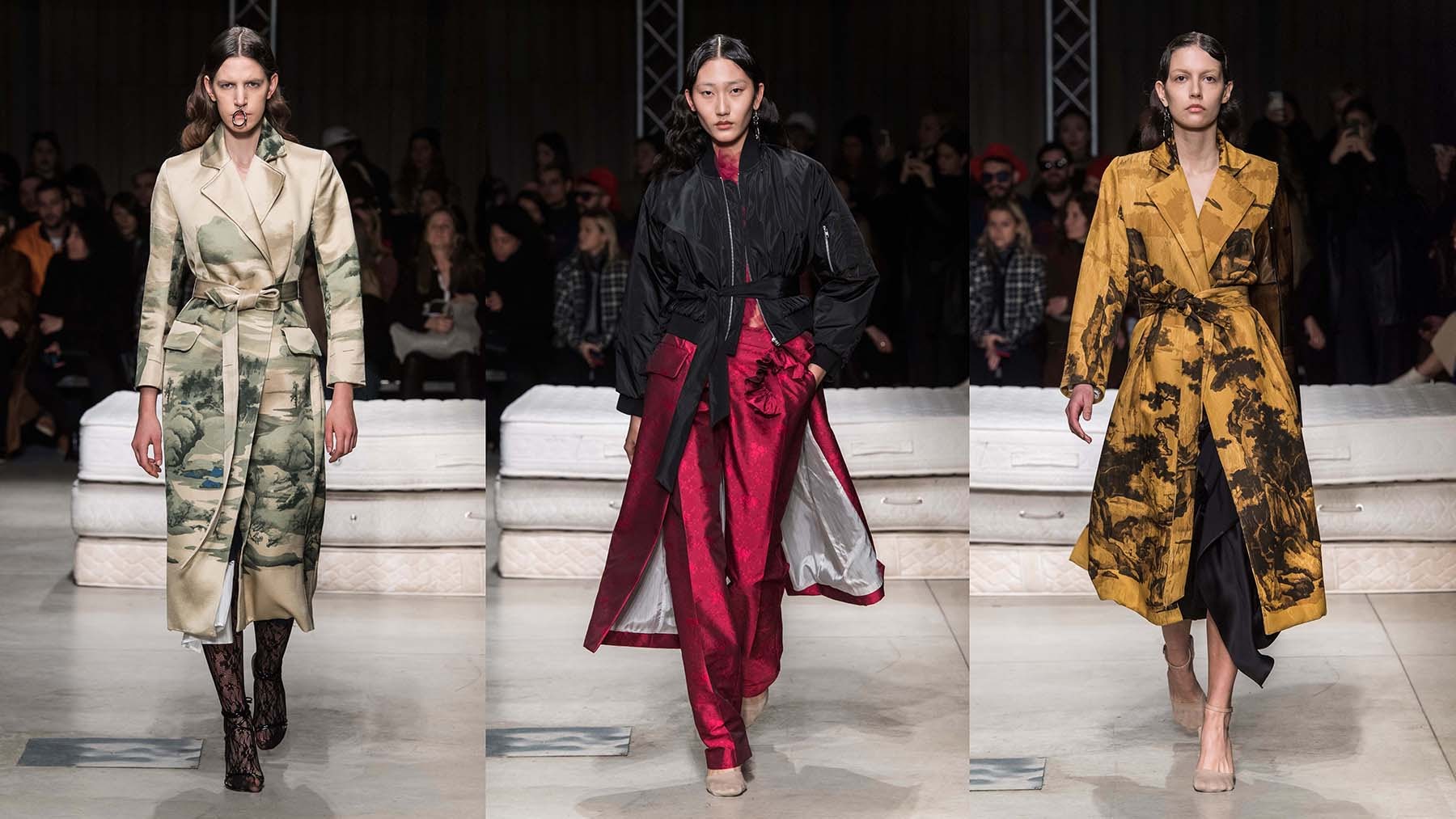 With its brutalist language, Act N.1 hit the right chord this season, because brutality was a popular topic. There was quite a lot of horror and more than a few monsters in Milan, in fact. It’s obvious to say, but the division and darkness of the current political moment almost necessarily translates into heavy-handed, brutish and scarily militaristic visions. Yet, the sight of a big-booted, menacing march of fierce gals all over the catwalks sent shivers down my spine.

There were Frankenstein wives juxtaposed with romantic Wednesday Addams over at Prada, where Miuccia delivered a very Prada-esque distortion of ladylike tropes and Swiss boarding school severity, dressed up with enough decayed flowers and bags to keep millennials and non-millennials salivating. It worked well, but one couldn’t help but feel the brand’s on-going attempt to regain relevance of its heyday, which left a forced mark over the proceedings. 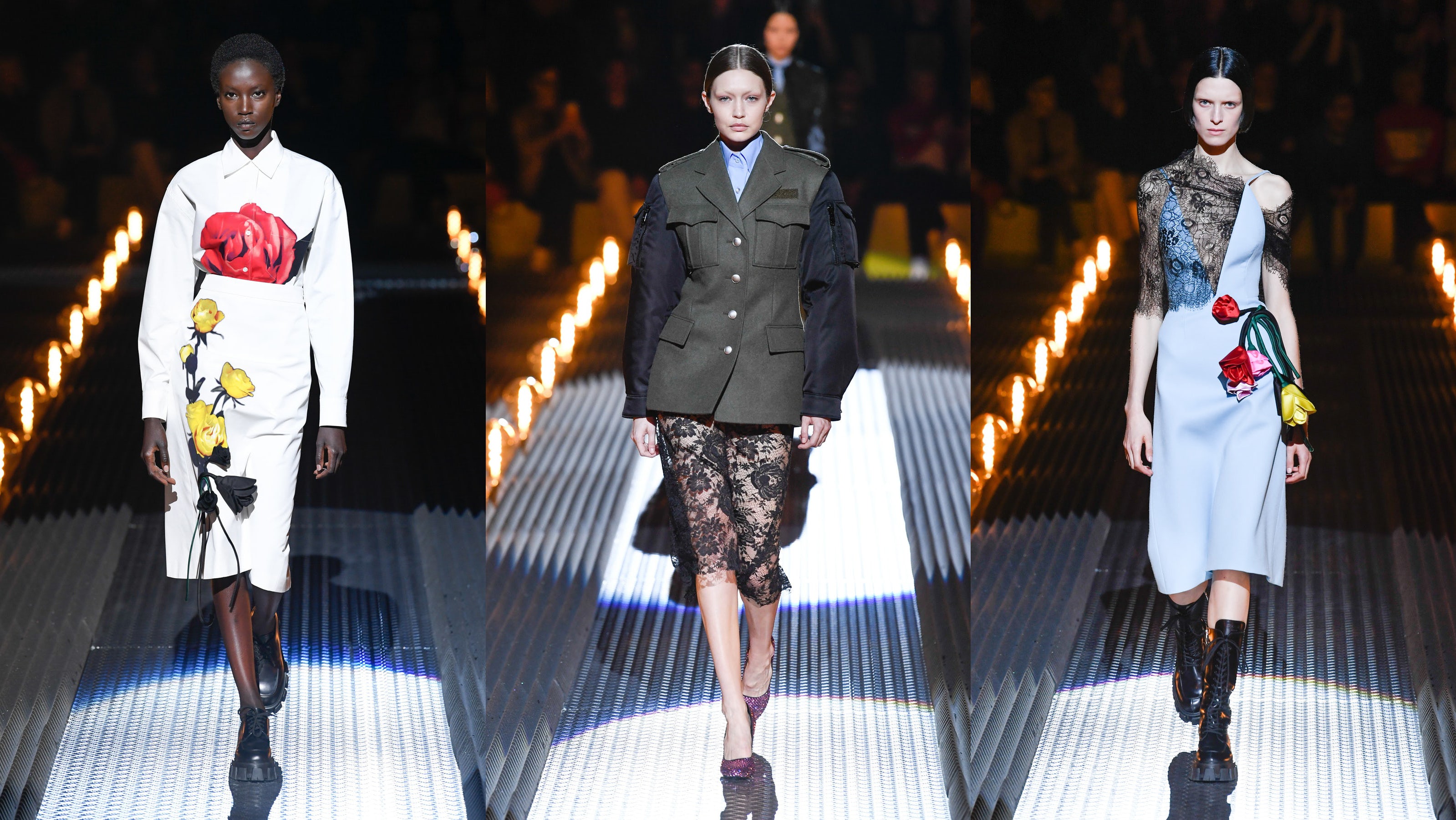 At Bottega Veneta, too, Daniel Lee took a rather forced approach to what was the season's most anticipated debut. His first show needed to make a mark, of course, but the lug-soled boots, shielding tailoring and cyber motorbike gear felt frankly a little de trop. They were mixed with glitzy, softer, ladylike pieces, and the overall effect, although a bit rigid, offered concessions. Luckily, it was not as Old Céline-inclined as Lee’s pre-collection might have suggested. The menswear, meanwhile, was smashing: a sharp take on brutalist tailoring that owed a lot to Rick Owens and Carol Christian Poell but felt relevant.

Francesco Risso's quest for a personal form of neurotic eroticism at Marni came with heavy fetishist riffs and ultimately did not deliver because it came across as literal and heavy, lacking the brand of freewheeling lightness that is Risso's charming signature. With its throbbing lights, pipe organ music, spiky masks and cast of hunch-backed monsters, the Gucci show was heavy and brutal too. Alessandro Michele has a bold knack for visual character-building, but his modus operandi is dead-serious, and the effect is rarely if ever enlivened by the jolly touch of irony. Estrangement, à la Bertolt Brecht, or something along those lines would make the whole Gucci theatre feel round and real, less of fashionable mise en scène. And yet this Gucci collection marked a decisive step forward for Michele: a move away from decoration towards an exploration of shape and volume that owed a lot to Comme and Margiela, but nonetheless felt bold, new and compelling.

Elsewhere, Milan was all about daywear, preferably with nods to the Eighties and the Nineties, which is a time when “Made in Italy” truly boomed. Back then, the Italian look was all about daywear, so, in a way, things are coming full circle, which is a good sign. It's all about excellence of materials, superiority of craft and a firm will to dress up the real lives of real women with real clothing that is spirited instead of being boringly normal. Not an easy balance to achieve, but one that the Italians manage well. Paul Andrew, freshly appointed the sole creative director of Salvatore Ferragamo, and his men’s design director Guillaume Meilland, presented some excellent daywear. They are a Brit and a Frenchman working in Italy, but hey the world is global. Working ‘80s volumes and sleek precision with soulful craft, the two delivered a charming, sensible take on understated luxury that had elan and a palpable Italian feel.

There was a new energy at Tod's too: lines were sharp, the colour palette rich and the message — nonchalant elegance — felt relevant. This is a direction the brand should pursue in the future to access its true place in the upper echelons of the luxury market. The daywear was poetic and precise at Jil Sander, aristo-bohemian at Etro, and grunge — think wealthy madame on a Saturday morning spree to the bookstore — at Agnona, while for N.21 it all came down to coats and dresses for the bourgeoise woman inclined to sinning. It took an ingenious use of the humble zipper, positioned in all the right places, to get the balance right.

Ultimately, Milan fashion seemed on a positive track — albeit not the most original one — because it was clearly trying to re-appropriate its origins. This was particularly evident, and eminently non-nostalgic, for houses with a long, established history. Angela Missoni went back to the soft strictness and elongation of a Missoni collection circa 1975. The high waists, flowing lines and glittery surfaces were just the same, but the results, far from being flat replicas, reiterated the validity of a language — the Missoni language — that evolves endlessly though repetition. Meanwhile, Donatella Versace keeps hammering with her new modus operandi: taking one thing from the archive and reshuffling it in more or less contemporary ways. This season, it was the safety pins of 1994, brought back with a grungy, deliberately chaotic spirit. It looked all pop-baroque — a bit Gucci, a tad Miu Miu and very Katie Grand, if you know what I mean — but nonetheless, it delivered an electrifying punch. A bit brutal, full of product, looking backward to move forward: the Versace collection sums up the spirit of the season perfectly. 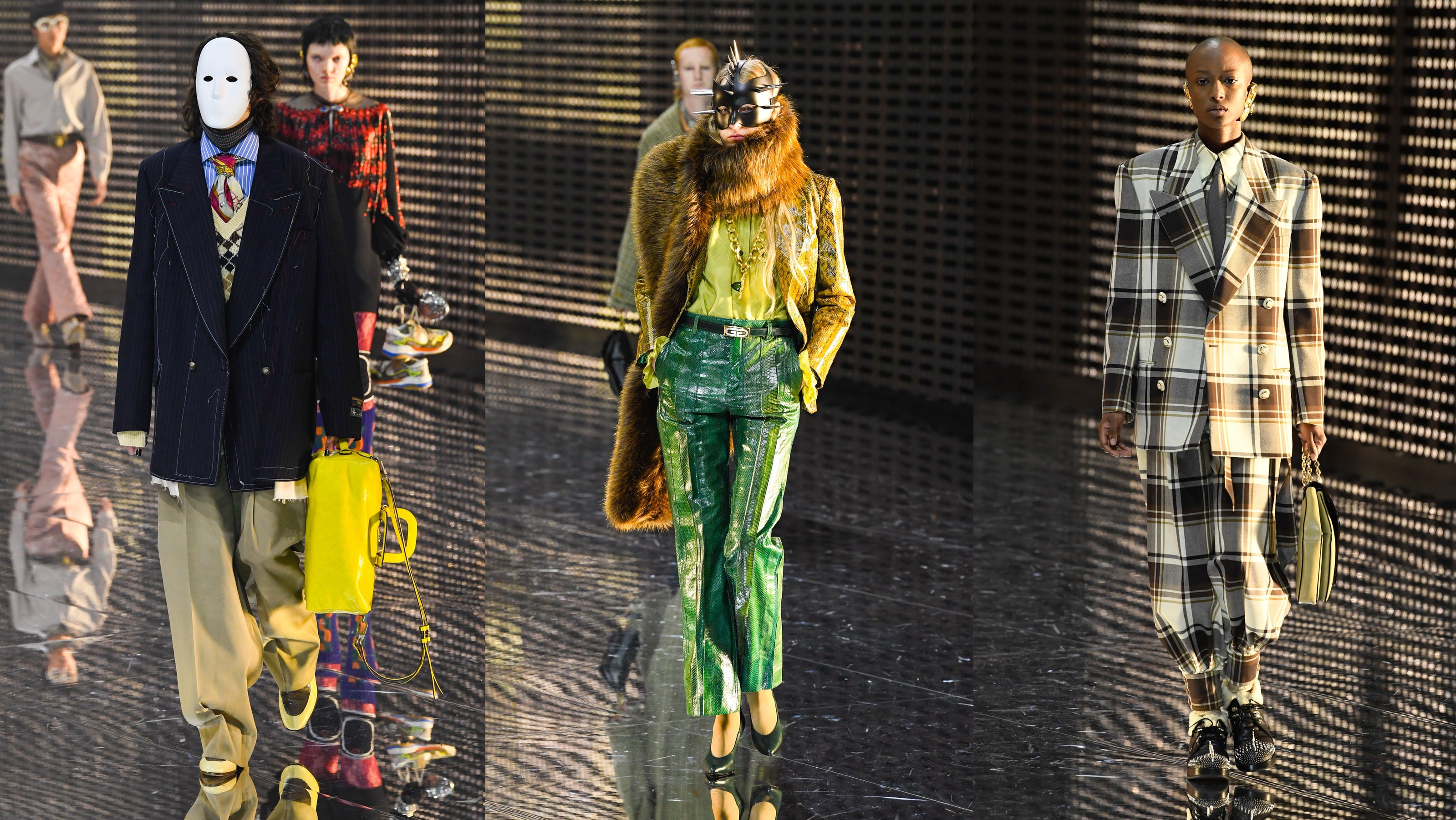