Paris, A Quiet Hub of Individualists

Despite the overpowering presence of French megabrands, Paris provides a platform for niche designers with progressive inspirations and creative output.

Paris, A Quiet Hub of Individualists

Despite the overpowering presence of French megabrands, Paris provides a platform for niche designers with progressive inspirations and creative output.

PARIS, France — Whilst many prestigious brands the world over are grappling with the trend of eccentric maximalism, there remains a quiet hub of individualists in Paris whose inspirations and creations have remained progressive in their translation of different cultures and subcultures, sometimes more than ever before. Though their wares may hang together in niche boutiques worldwide, these designers belong to disparate universes.

Hussein Chalayan called his Autumn 2016 show "Teutonic" (a 13th century word grouping Germany with its surrounding Northern European nations), which labeled the collection as an ode to the elements of German culture that fascinate this cerebral designer. Yes, there were lederhosen, but not in the traditional sense. Instead Chalayan cut smart leather pants and skirts beneath sculpturally cocooning wool coats or white shirts with segmented sleeves, and layered cape-shouldered knits with dangling hemlines over and under tailored flannel suits. Both ideas reflected a warm feeling of undone sophistication. 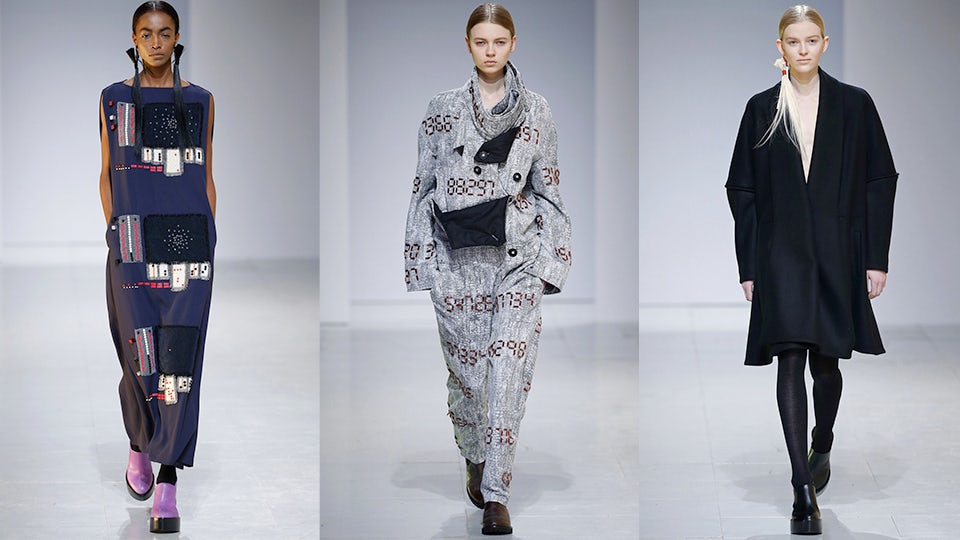 Countering that exercise in German sobriety, the show’s second half explored the nation’s DIY culture, its speeding autobahn highways, and its ingrained fairytale history via a slew of intense graphic outfits. Those employed linear prints (lifted from the 1970’s pattern-making magazine Burda), Atelier Swarovski appliqués evoking digital clock monitors, and diamante string vests or flight suits emblazoned with German text and street map motifs. The duality of this collection’s two distinct chapters felt intuitive to Chalayan’s current dilemma — that of a highly conceptual and talented designer with a year-old London boutique — a place where creativity and commerce must truly meet midway.

The position of Issey Miyake is entirely different — designer Yoshiyuki Miyamae does not need to reinvent the wheel for a label so entirely entrenched in their signature pleating technique — however a show must be ‘a show’. Friday morning’s Miyake was overtaken by the overwhelming performance of Haruka Yoshida and Ei Wada, two musicians who merged intense industrial music with the strains of Pachelbel’s Canon by playing spinning exhaust fans with beams of light. 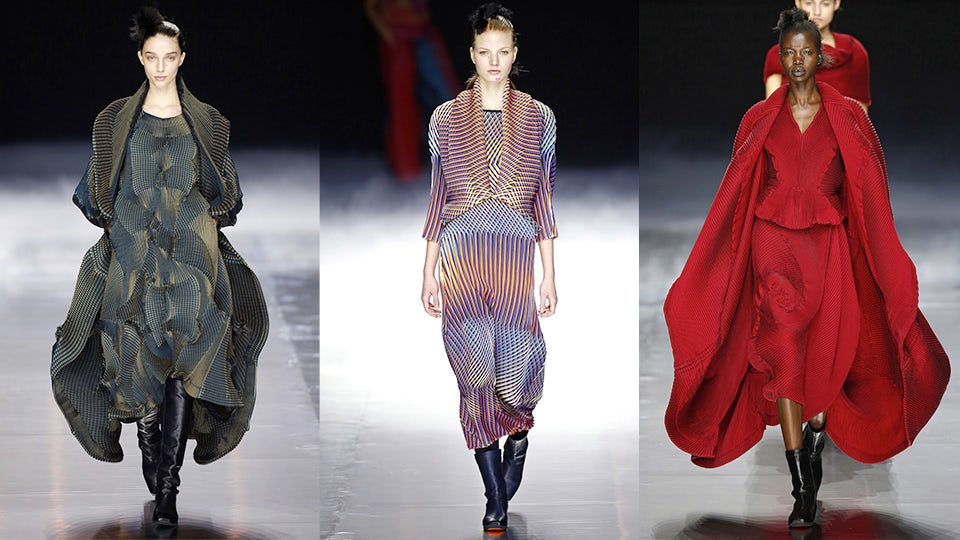 It made for an intense and disquieting runway experience, one that countered the lightness of the house’s warped kaleidoscopic tunics and trousers that arrived in the alternating techniques of ‘baked stretch’ and ‘3D steam stretch’ pleating. The former defined the eye-watering striations of orange, yellow and bright purple that bounced in waves across column dresses and blouses, whilst the latter created the pinched, undulating formations of dark silver, olive, and aubergine-coloured pieces that caused the models bodies to disappear and reappear in their mysterious folds.

The irrefutable mastery of craftsmanship that these clothes represent may boggle the mind, however this collection tiptoed a fine line between the label’s casual mission and the realms of wearable art – a place where such optical illusions lack any concept beyond purely cosmetic appeal.

Julien David is a Tokyo-based Frenchman. It is a rather unique précis as far as fashion designers are concerned, and one that informs his distinct approach to dressing both men and women in which he manages to carve out an ironic caricature of each garment he creates. In part that is due to the humorous way that David pads, bonds, pinches and stitches his designs to give them a larger-than-life appeal. A denim workwear jacket in his Autumn show looked fit to stand up all its own, wrinkled pleather and aluminium pinafores appeared transposed over a poplin shirt and jeans as a two-for-one outfit deal. 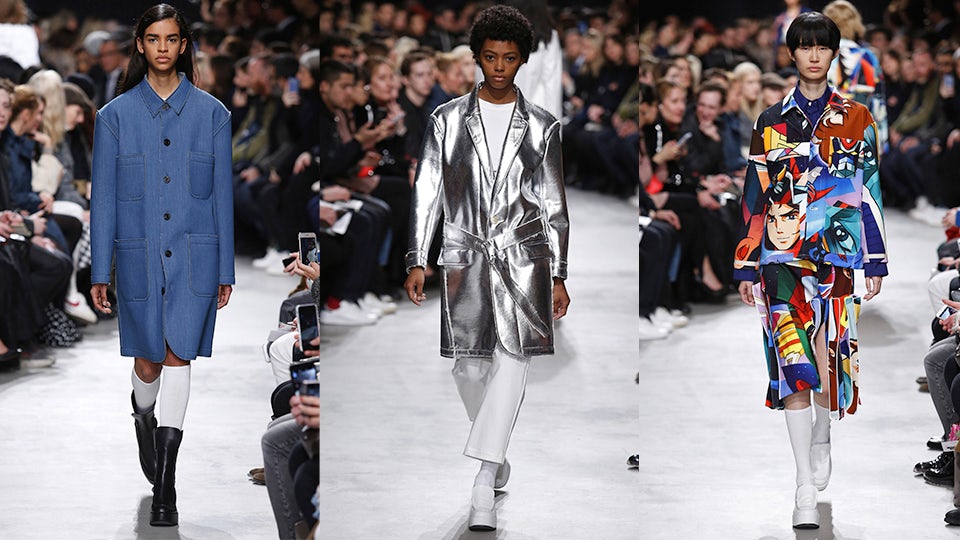 These slightly Absurdist moments gave this collection a street-smart appeal, appearing as a Japanese take on French dress rather than the inverse — and a hypercolour print from 1970’s manga cartoon Grandizer was the most prominent evidence of that fact. It covered a geometric patchwork skirt, a shirt jacket and a low-slung belted coat — all pieces the designer reworked in silvery aluminium and black pleather for a tacky twist on the global tropes of the bourgeoisie.

The German designer Lutz Huelle has probably never been so relevant as now, what with the Vetements revolution sparking a revival of the subversive street uniform that Huelle has riffed on for over a decade. He is a specialist in bomber jackets (and has dedicated entire collections to deconstructing them), and they featured prominently in this latest outing too, as a part of his concept for shrinking oversized garments and patch-working daywear and eveningwear together as one. 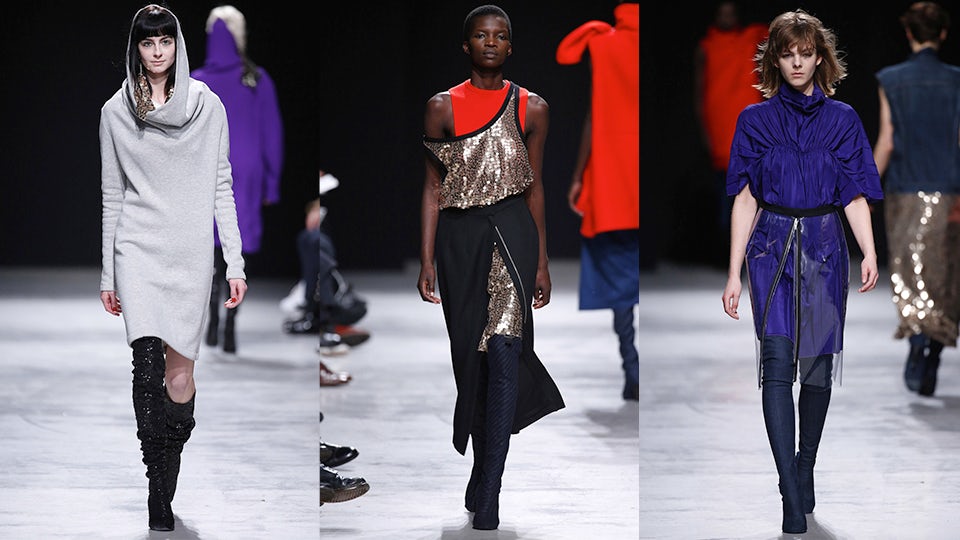 Here he cinched them in with clear belts that revealed the conceit of bomber and denim jacket patterns panelled into wool felt coats or swathes of golden sequins. The effect was unsettling and sexy all at once. Elsewhere he spliced sweatshirt sleeves onto pleated column dresses, in an act that felt more radical than the zipped pencil skirts, cowled jersey dresses and menswear shirting that felt like filler amongst his bolder design statements. Thankfully those gave ample food for thought.