This season at the men's shows, theatrics were played up to cover a certain unworthiness of ideas and, sometimes, downright total nothingness. It's the clothes that must do the storytelling.

This season at the men's shows, theatrics were played up to cover a certain unworthiness of ideas and, sometimes, downright total nothingness. It's the clothes that must do the storytelling.

PARIS, France — Flowers, for spring? Groundbreaking. Lightness, for spring? Ditto. And the same applies to bright colors and pastels. That's how the crammed Paris schedule, save for a few designers who seemed not to have gotten the memo right about what meteorological season they were supposed to be designing for, could be summed up. (The wonderful, mostly gunmetal grey and very strict Undercover detour around Nosferatu-worthy formality was most likely a winter collection. Oh well.)

That summery feel reached the point of banality. Which, in a way, is telling of the current times, when the most blatant theatrical tricks are being played up to cover a certain unworthiness of ideas if not, sometimes, downright total nothingness.

The summery Parisian feel, conveyed mostly through en plein air shows, came with an invitation, metaphorically speaking, to slow down a bit, taking a moment to smell the flowers and unwind from the overwhelming stress of modern digital life. It was funny actually, and occasionally very soothing, that most shows conveyed atmospheres of bucolic bliss in a moment when Paris, as a city, has become unbearably chaotic to navigate. Due to an avalanche of roadworks, and a management of city traffic that to external eyes seems too counter-intuitive to understand, getting from one show to another was hell: a complete nightmare. Once shows started, however, minds calmed.

Imagine, for instance, the sense of relief in entering a Parisian landmark like the Carreau du Temple, the steel and glass covered market that sits at the top of the Marais, only to find a lovely field of white carnations laid out on the floor. And imagine the sense of angst and despair in seeing a storm of models destroy it all, stomping on the flowers, on the finale. It all happened in the early days of the week, at Off-White. A vision so disrespectful, so saddening and so telling of how much storytelling is actually just vacant imposture for fast digital consumption that it really set the tone, at least for this writer, for the rest of the week.

I never got to know if it was some kind of metaphor — the collection being titled Plastic, it might have been a naive attempt at symbolising men destroying nature — but the image of the torn flowers left a lasting impression, certainly a longer one than the vaguely hippie-flavored, evidently Futura-stamped clothing Abloh sent down the catwalk. Off-White increasingly looks like an exercise in design banality served as the peak of the conceptual. But past the outerwear, the boiler-suits and the T-shirts, there is very little to take away. (Suiting is a big interest for Abloh, but he really needs to work hard on that because the results so far are clumsy, no quotations needed.) 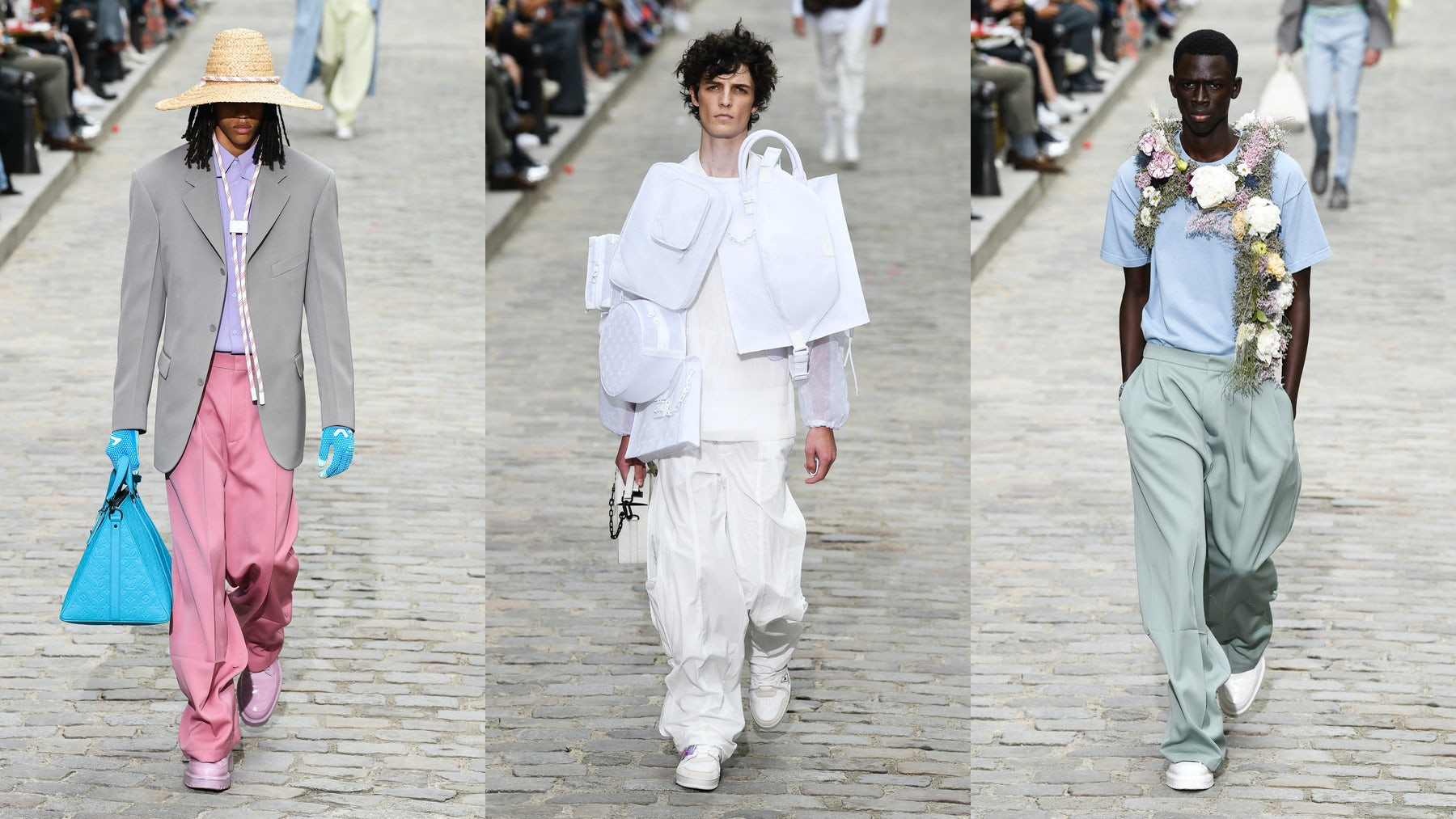 View Collection
Curiously, or rather fittingly, after the carnation debacle, Abloh sung an ode to flowers, complete with flower prints and a sea of pastels, at Louis Vuitton. This being the time we live, flowers, of course, were interpreted, according to the show notes, as a symbol of diversity: there is no way to escape the urge to commodify such a challenging concept, transforming inclusion and diversity into just another oppressive set of rules. That's what happens when the system is ruled by the fear of public shame à la Diet Prada, and intelligence has gone down the drain.

Back to Vuitton, over there Abloh is supported by a valid team -— the tailoring was gorgeous — so the collection marked a progress in an interesting direction, all flowing volumes and clothing modules tied together with strings. Clothes like kites: a concept and a technique that, honestly, owe too much of a debt to Craig Green. Appropriation of other designers ideas notwithstanding, it would be interesting to understand the actual customer Abloh is targeting. The kids that love him rarely have the spending power to afford Vuitton, while the wealthy ones probably look for something a tad more flashy. At Vuitton, Abloh got the dreamy plein air mood of the season right.

The "say it with the flowers" mindset was particularly poetic and sensitive at Jil Sander, where Luke and Lucie Meier continue providing their own touch of crafty warmth while being consistent to the purist, less-is-more heritage of the house. Sometimes their considered way with style matters makes you wish they showed a little more of personality, a bolder stamp, but their emotional take on simplicity is captivating, making for beautiful product.

Pierpaolo Piccioli at Valentino went on a psychedelic, mind-travel trail that translated into bright prints, devised with cover artist Roger Dean of Yes fame, and vaguely ethnic shapes — djellabas, tunics — mixed with tailoring and worn with sneakers. It made for an enjoyable spectacle that nonetheless still poses questions about the identity of the Valentino man. Season after season this man changes: he was a trapper one year ago only to sober up in the winter and go psychedelic now. Tellingly, there was something vaguely Prada-esque about the whole endeavour, and some slogans and titles imposed over the prints had an Off-White stamp. But it was interesting to see Piccioli, finally, mould the Valentino man over himself because that could be an enriching aspect to explore. Piccioli's own Roman nonchalance, his absent-minded way with dressing up, are qualities worth investigating out of his personal biography as a set of Valentino values. 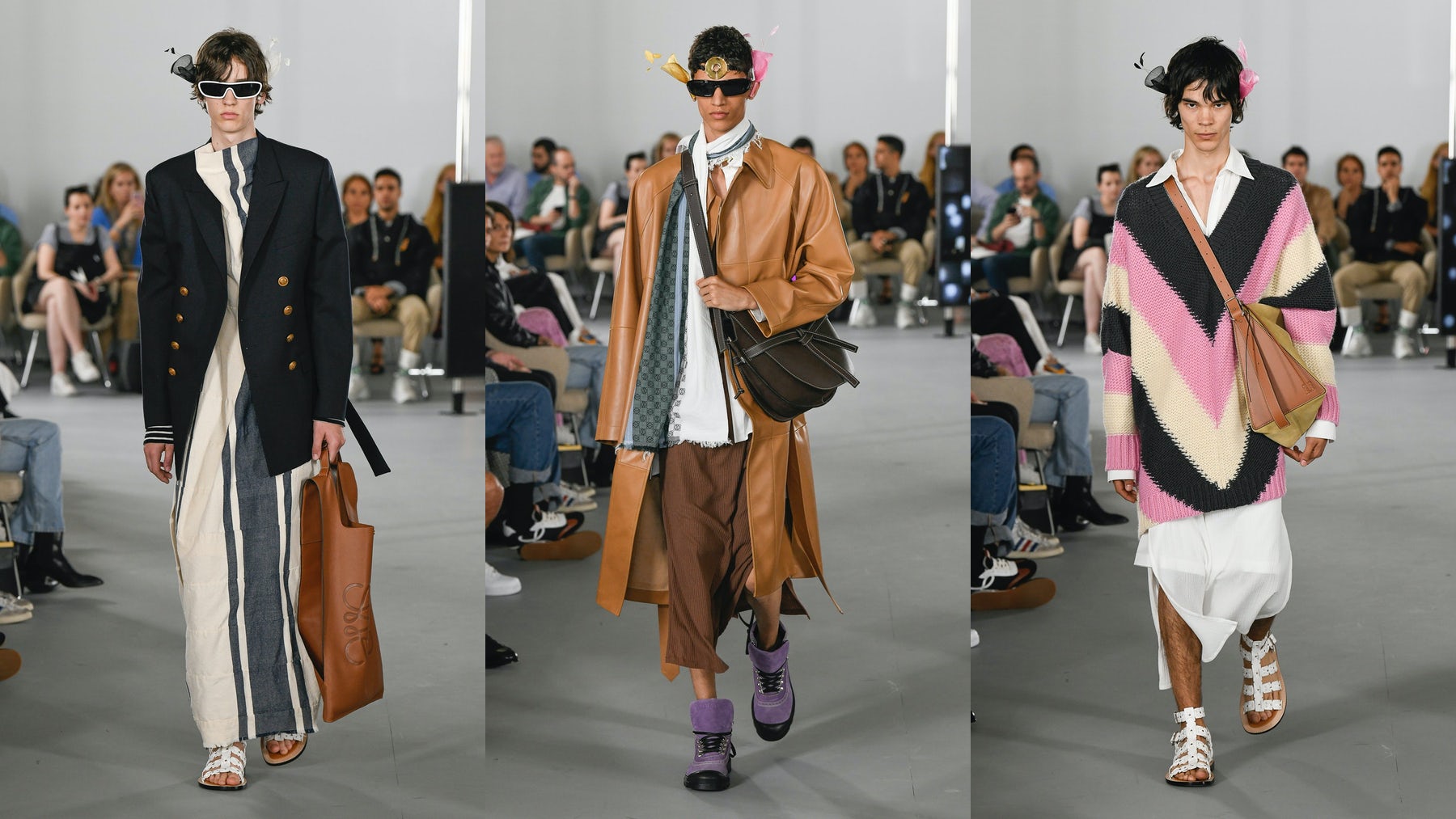 View Collection
It took Jonathan Anderson at Loewe, however, to fully capture the escapist mood of the season in a charming vision of dreamy nomadism charged with a brand of Balearic sensuality that is his signature for the storied Spanish house. We've seen men in caftans and djellabas before, of course, although not done in gold or powder-pink suede. What Anderson excels at is breaking down the inspiration and making it abstract in a very crafty, very raw kind of way. He mixed it all up with naval uniforms, bizarre feathery headgear and mind-expanding jewellery, and it was a blast.

When invention and showmanship meet superbly designed product that looks actually very desirable and fresh, what's not to love? With this collection, Anderson also brought the Loewe man closer to the woman not only in terms of design — some of the pieces, like the tunics and the long tank tops were perfectly interchangeable — but also in its artistic, grown-up attitude. Loewe's former childish jolly mindset, meanwhile, migrated over to Lanvin, where Bruno Sialelli needs to truly work on an original tone of voice.

Men were in escape mode in Paris: not only from the constraints of modern life but also from the constraints of traditional masculinity. There was something liquid — both sexually and sartorially — and a lot of slinky satin in the collections of newcomers such as Sies Marjan and Ludovic de Saint Sernin. In both cases, the message was not fully delivered, and the collections looked like a jumble of eccentric pieces with a fey touch (Sies Marjan) and a rather weak effort at capturing the sultriness of sex in cloth (de Saint Sernin).

It all looked more interesting when the name of the game was, literally, putting men in historic women's frocks. The goings got couture-like but ultimately meaningless outside of the realm of the fashion show at Thom Browne — a celebration of paniers, codpieces and seersucker that was pure sartorial entertainment. At Comme des Garcons, instead, the action took an exciting turn, translating into a proper fashion proposal: an orgy of frock coats, dresses and skorts, worn with sneakers, that defied expectations of what men's or womenswear should be like. Was it one or the other? It does not really matter, according to Kawakubo, and that's what counts.

What this fashion week left you craving for was stimulation of any kind. The "fuck the system" attitude Vetements promotes came with another meta exercise in character building that, although strong, felt like the nth iteration of a code. The way Demna Gvasalia deals with mimicking identities through fashion is certainly challenging, but there is not much progress and, most of all, placing it in the context of designer fashion, for those outrageous prices, gives it all a rather sinister, almost corporative, patina — despite the anti-corporative stance.

The amount of rage and angst Raf Simons throws at corporate America is massive and certainly understandable. But in fashion terms it looked, again, like the iteration of a code: a neurotic mix of punchy slogans, lab coats, gloves and boots that certainly make sense to the designer, and translate into a catchy image, but that are hard to decipher for outsiders, and ultimately come across as a bit forced. Equally forced, at this point, is the idea of showing in the suburbs, bringing viewers on a pilgrimage out of town, in places that people only want to escape. The avant-garde as suffering? Basta.

The best shows of the season delivered stimulation in a perfect mix of concept, showmanship and undiluted, authentically progressive clothes-making. One cannot have one without the other, after all, as the imposture of hyper-styling is wearing thin. Ultimately, we are here for the clothing, let's not forget. The theatrics can add layers of meaning, but it's the clothes that must do the storytelling. They must speak by themselves, most of all. 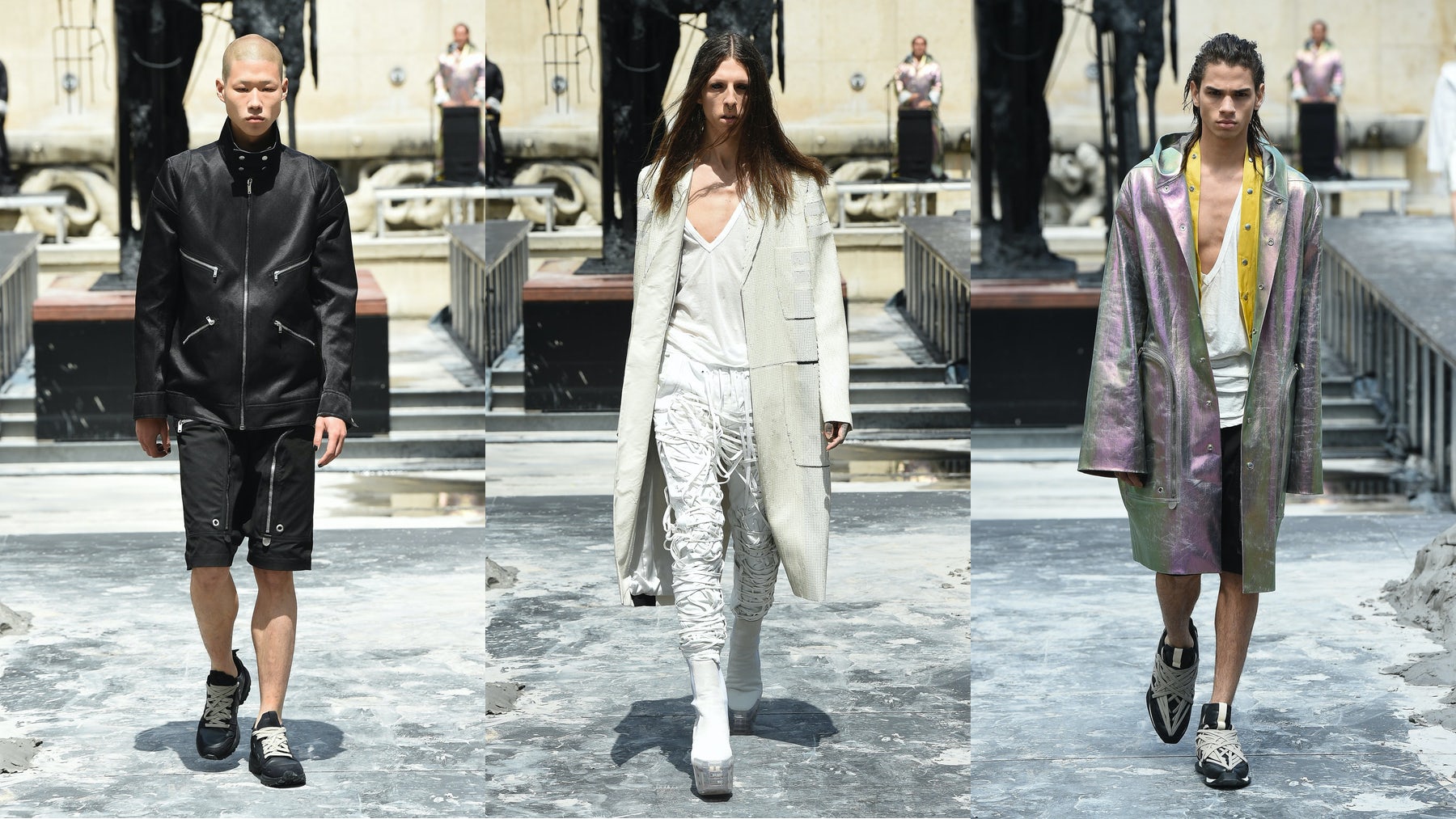 View Collection
By exploring, in a very abstract way, his own Mexican roots, Rick Owens provided a punchy mix of angular tailoring, jumpsuits, rethought workwear, sequins and metallics, with outsized pockets adding a sense of pragmatism and lucite stack-heeled platform boots throwing the balance off-kilter. The clash of the glamorous and the rough was potent, almost primeval, and functioned as an antidote to any kind of constraint. By being extremely rigorous in the creative process, Owens offers a vision that is at once strict and liberating, perfect and imperfect, consistent and ultimately unique.

Controlled chaos is a game that Glenn Martens plays like a master, too. In the span of a few years, the Belgian wunderkind has shaped Y/Project into a creative force to be reckoned with. Martens can get away with a lot because he understands construction. His tailoring might look bonkers, but actually it is not. This season, by focusing on a kind of deranged classicism, Martens took another step forward — leading the fashionable vanguard into more formal territory, in his own twisted way — and scored. Because, you know, no one is interested in hoodies, sneakers and streetwear anymore.

Right now, it's all about rethinking tailoring, and maybe draping. Celine was all about the double-breasted, worn either with tailored trousers or jeans. Even Matthew Williams of Alyx added tailoring as a category, moving in a new direction that will bear a lot of fruit. No summery cliches here, just functional, beautiful clothing with a new sense of elegance. That's another take away of the season.

Inside LVMH's Plan to Conquer Menswear