In Pursuit of Sensual Transport at Givenchy​

Clare Waight Keller was fascinated by the interplay of brutalism and glamour in a collection that demonstrates she is remaking the house at a rate of knots. 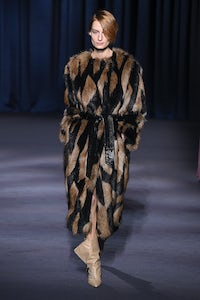 In Pursuit of Sensual Transport at Givenchy​

Clare Waight Keller was fascinated by the interplay of brutalism and glamour in a collection that demonstrates she is remaking the house at a rate of knots.

PARIS, France — Clare Waight Keller consolidated her impressive landgrab at Givenchy on Sunday with a collection that relocated all the house’s classic froth, Hubert’n’Audrey in Paris, to a decadent Berlin, divided by a Wall but united in its pursuit of sensual transport, in an “air thick with sleaze and danger” (so read the mood-enhancing notes on our seats). Like the notorious album that Lou Reed named for the city, in fact. Speaking of which, a train chugged furiously on the soundtrack, carrying passengers to the damned know where.

Grit and luxury, East and West…these were the contrasts of the Berlin that Waight Keller drew on. The dialogue she established between the two was provocative. The show opened with sensationally rich furs. “We’re countering the spirit of richness with the fact the fur is fake,” the designer pointed out. Nothing fake about the leather though, even if it was treated to shimmer and shine. Under the fur and the skins was razor-sharp tailoring, or totally transparent lace, deliberately racy. Not for the first time this season was the discreet charm of the bourgeoisie brought into play.

In the context of libertine Berlin, the obvious reference was the films of Rainer Werner Fassbinder. That was my bait. Waight Keller didn’t bite. Still, she was fascinated by the interplay of brutalism and glamour. Leather and lace, in other words. And if her collection spoke to the night in its darkness and monochrome starkness, it still shone, in jacquard shot with sequins, in the oily sheen on a closing clutch of cocktail dresses, in the pristine glare of a white parka.

Between Waight Keller’s debut for Givenchy and this sophomore outing came her first couture collection for the house. That was distinguished by its tight focus. The same laser eye applied to the menswear and womenswear she showed on Sunday. It made all the difference. Call it a quantum leap if you like, even if there were hiccups (pleated purple leather?). The point is, Waight Keller is remaking Givenchy at a rate of knots.