Phillip Lim Visits the Land of the Rising Sun

'Japonisme' is a well-worn theme, though Phillip Lim approached it with a steady hand. 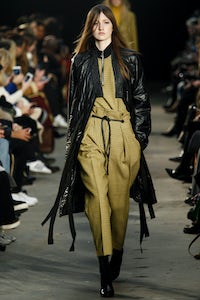 Phillip Lim Visits the Land of the Rising Sun

'Japonisme' is a well-worn theme, though Phillip Lim approached it with a steady hand.

NEW YORK, United States — Phillip Lim doesn't subscribe to the tyrannical codes that once applied to being a fashion designer. Lim​ is more dreamer than diva, and he's the first to admit it. Backstage after his Autumn/Winter 2016 show, he discussed reincarnation and, more specifically, how he feels he was certainly Japanese in a past life. He's not been there lately — there's a trip planned for March — yet the collection was indeed an ode to the land of the rising sun, a place the Chinese-American designer holds nearly as dear to his heart as his homeland.

Though 'Japonisme' is a well-worn theme, Lim approached it with a steady hand, mostly tackling its shapes and soft colours (mustard, olive and apricot were prominent) separately to avoid too literal an effect. He mixed it up with a liberal dose of the streamlined, boyish tailoring and outerwear that never quite quits his lineup. Here blazers, parkas and fitted blousons came in houndstooth and a Prince of Wales check or panelled in chenille velvet and leather, whilst storm-collared coats were slashed with whipstitch cording.

A handful of parachute jackets and gilets featured large, loopy quilting and, though Lim called them "liners," they acted as a top layer for ribbed turtlenecks, woolen dresses and odd, curvy dungarees, some of which came stapled together for an effect not unlike kintsugi, the Japanese art of repairing porcelain with veins of gold.

Nods to the kimono were peppered throughout the collection, as knits featured obi-like sash belts or 'plaited' uneven hems, and jackets were hung with judo ties that created moments of undone asymmetry. One of the prettier manipulations occurred toward the show's end, as Lim experimented with the idea of "clashing kimonos" (he mentioned the way Japanese archers would wrap their sleeves to shoot an arrow) for soft, lantern–sleeved collage dresses appliquéd with sequined maidenhair leaves and zips down the neckline and shoulders. Later that leaf motif returned in full force on an outstanding fuchsia cocktail sheath, its hemline tracing the organic curves of the shimmery, falling flora. 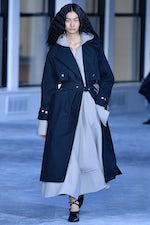 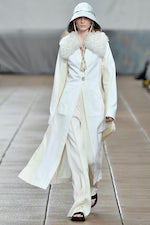 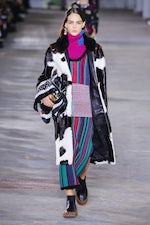 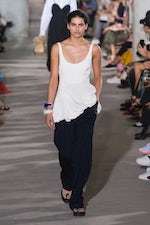