Each of the incubator's three designers mined their own identities for inspiration. 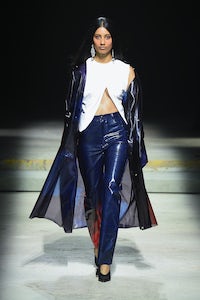 Each of the incubator's three designers mined their own identities for inspiration.

LONDON, United Kingdom — Fashion East started the day with a bang. One American editor, in London for the first time, remarked that it was the kind of show that could only happen in this city, which is true, not least because each of the three designers who took part in the show explored their own identities, which, together, reflected the melting pot of the British capital.

Supriya Lele, a British-Indian designer, and A Sai Ta, a British-Vietnamese-Chinese designer, were both keen to explore their heritage the in-betweenness felt by many first- and second-generation immigrants. Of course, the power of this line of inquiry was only heightened by the looming presence of "Brexit" and American president Donald Trump, whose platform of 'America First' often appears to put immigrants second.

For Lele, it meant exploring India without defaulting to costumes. Her collection, which consisted of sporty dresses and skirts informed by the drape of a sari. Two particular pieces twisted around the body with ease for a reveal-and-conceal effect. A lot of it was sexier than what she’s done before, channelling the sensuality of the sari and fusing it with a cool urban attitude. Naysayers will say that Lele’s use of plastic was all too reminiscent of Calvin Klein, but she’s been using the material since her graduate collection, long before Raf Simons. She’s drawn to plastic because of how much synthetic fabric is used in India, she says. For this collection, she plasticised organza for coats and trousers. There was also crystal jewellery fit for a maharaja worn under sheer nylons and jersey, a bit like how Andy Warhol would wear a diamond necklace beneath his roll-necks to feel beautiful on the inside.

A Sai Tai, who was grew up Andrew but reclaimed his Vietnamese name at 18, delivered a collection that referenced his council estate upbringing with nods to south London girls and first-generation Asians. He showed classic wardrobe items such as the trench coat, the bomber jacket and denim, which were completely re-framed them with a textural twist. His signature overlocking fabrication was as good as ever, frayed and ethereal but grounded by the severity of nunchuck handbags. “The collection was about the idea of protecting yourself and projecting your greatness,” he said. Softer fabrics were made to be heavy and vice versa, from stiff silk organza to chainmail that was actually embroidery. Plus, there was a generous dose of wit, with his mother, wife and sister scanned onto a Champion boxing belt and printed onto a bustier worn over an overlocked Burberry check-like skirt and de-constructed trench. “Asians love Burberry, especially my mum,” he explained. “I wanted to take something iconic and fuck it up.”

Last but not least, Matty Bovan made his final outing as part of Fashion East. Bovan’s casting is always starry thanks to his mentor Katie Grand, but his work speaks for itself. As ever, his crafty vision of post-apocalyptic utopianism was colourful, textured and made in a vision of himself. It’s post-ugly in the sense that it doesn’t abide by the rules of polished elegance. Instead, it reflected a "Mad Max" universe with plenty of camping and motorcycle references. There were also primary-coloured nods to 1960s Pop Art, which came through in vibrant prints, as well as customised Coach accessories and Linda Farrow sunglasses, more akin to art pieces than real product collaborations meant to sell.