The collection was an extraordinary, fetishistic fashion journey into the depths of the American teen psyche as idealised by a Japanese outsider. 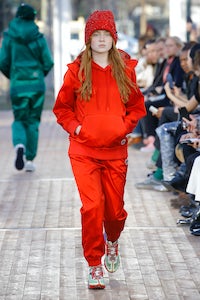 The collection was an extraordinary, fetishistic fashion journey into the depths of the American teen psyche as idealised by a Japanese outsider.

PARIS, France — First out on Undercover’s catwalk on Friday was flame-haired 15-year-old Sadie Sink, Max in the second season of “Stranger Things”. Jun Takahashi is obsessed with the show, and heaven and earth were moved to get Sink from New Orleans, where she is currently filming, to Paris. She was wearing a red track suit, with glittery red toque. The girl behind was wearing something similar, in jade. And then we were off down the rabbit hole, on one of those extraordinary, fetishistic fashion journeys into the depths of the American teen psyche as idealised by a Japanese outsider: jeans and t-shirts, striped college blazers, team sweatshirts, letter sweaters, workout wear, youth groups and on and on into zones that weren’t quite so identifiable.

It’s in Takahashi’s nature to unsettle his audience. There was a profound strangeness in his presentation: the way that a t-shirt or a parka was suspended in agitated motion; the foiled college stripe and glazed corduroys, shiny as Vegas; the polo shirt and chinos that, from the back, made a jumpsuit; the pure shearling coat with the corseted waistline…he has always been a master of illusion but it felt like there might be a message here.

The words on the back of a parka pledged allegiance to The Slice of Cherry Pie Club. That deliberate echo of “Twin Peaks” made the message clear: Innocence is not what it seems. That notion loaned an ironic subtext to the slogans with which Takahashi strewed his clothes: Total Youth, Unbroke Innocence, Be Aggressive Passive…Aggressive. Plus the one that came printed on the invitation, We are Infinite. It bugged me until the very end of the show, when a young male voice made a poignant confession of undying love which ended with the words “We are infinite”. The penny dropped. “The Perks of Being a Wallflower”!

Takahashi’s models looked like any of the girls from any of that type of movie. Like Sadie Sink. Breathtakingly young. That made a passage of black clothes, dressy but funereal, all the more unsettling. It made me think of what breathtakingly young children just went through at Marjory Stoneman Douglas High School in Parkland, Florida. Takahashi had planned his collection before that school shooting, but remember, there are no coincidences. In the light of how those children have mobilised since the tragedy at their school, it was hard to see Takahashi’s finale – his young models led by Sadie, walking out to the tune of Bowie’s “Heroes” in a uniform of parkas and wellies branded We Are Infinite – as anything other than an endorsement of their bravery, their resilience and their solidarity, which, on March 24, they will share with their peers across America in the “March for Our Lives”. It was all the more moving for being so unexpected.