Federico Curradi talks to Angelo Flaccavento ahead of his debut as menswear creative director of Rochas this Saturday.

Federico Curradi talks to Angelo Flaccavento ahead of his debut as menswear creative director of Rochas this Saturday.

PARIS, France — Federico Curradi builds his collections up from fabric, with a very physical approach to making things, instead of obsessing about image-making like so many others. He is a country boy, of sorts. Curradi lives with wolves — literally! — in a house perched atop the hills between Siena and Florence. Yes, wolves: domestic ones, as tame as dogs.

But his passion for the craft of clothes-making — nurtured in his teens, while working in a tailoring shop — has brought him a long way from the uplands of Tuscany to the fashion capital of Paris where Saturday he will debut his first collection as menswear creative director of Rochas, part of its aspirations to build a full luxury proposition with a renewed focus on menswear, which was put on hold when Béatrice Ferrant left the house in November 2017. 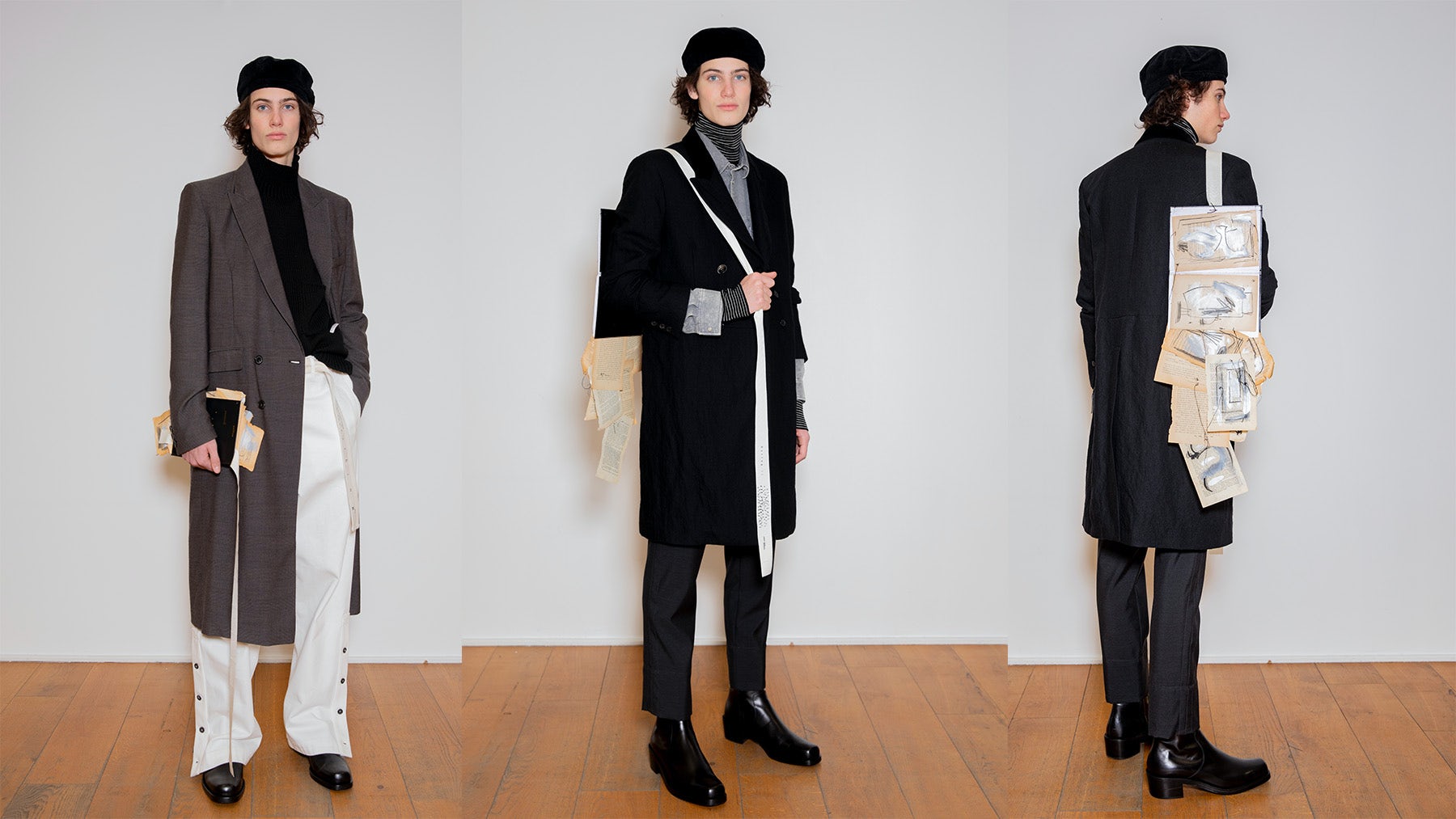 A tale of two cities — Florence and Paris — is integral to every aspect of the project, from creativity to production. “In envisioning the Rochas man, I immediately thought of Paris,” says Curradi, sitting in the Tuscan capital, where he runs a small studio-atelier and his namesake label. “Paris for me is the essence of Rochas, a place of beauty and elegance all around," he continues. "I kept thinking of the Paris of artists such as Amedeo Modigliani or Constantin Brancusi: flâneurs who drenched their eyes with endless forays across the neighbourhoods and the arrondissements, but also hermits who spent weeks in the atelier creating."

For Curradi. the inspiration is more than mere storytelling. The designer’s own hands-on approach to fashion-making means he can physically and mentally relate to the character of the artist, he says. After all, Curradi, for his own collection, has used real flowers and leaves to create block prints for garments. "I will keep this sort of neo-artisanal experimentalism for my own label, which is a small and very artisanal operation targeted to a younger, grungier audience,” he explains. 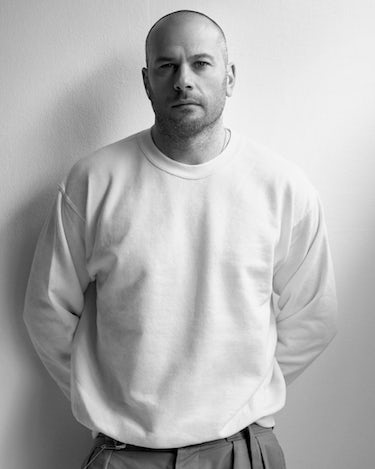 “Elegance is what I am after for Rochas. Elegance of a soft, masculine kind: easy and not overtly manicured. My aim is to create something with substance and soul."

A quick look at the racks a week later in the Rochas showroom in Paris reveals an elegant and luxurious-looking — but not fancy — array of items, from sturdy outerwear to supple knitwear, infused with a sense of nonchalance and sophistication that recalls the best days of Lanvin in the Elbaz-Ossendrijver era, and a softness that harks back to Armani’s 1980s heyday.

Rochas currently belongs to the French beauty giant Interparfums. But production is licenced to Onward Luxury Group (formerly Gibó, which has been based on the outskirts of Florence since its inception in the 1960s. This, for Curradi, is an enormous plus. "I kept visiting the factories constantly, almost every day, in order to get everything as I wanted. I am not one of those designers who give sketches to the ateliers and wait for samples to be delivered. I need to adjust things in the making, with my hands. I feel very lucky to have the OLG people on my side."

Living close to factories and ateliers has always been important for Curradi. After his first job in the tailor’s shop, Curradi launched a small, atelier-made run of urban separates that, thanks to his stubbornness and dedication, he managed to sell to a handful of hip boutiques across the world, including Scoop in New York and Parisotto in Florence. It was the early 2000s and the pieces got the attention of Toni Scervino, who entrusted Curradi with the task of developing Ermamno Scervino’s menswear. Curradi remained there for four years, honing his skills, before becoming head of menswear for Cavalli and then men's artistic director at Iceberg — all experiences that allowed him to work directly with artisans and dressmakers. But his new post at Rochas is a big step forward. 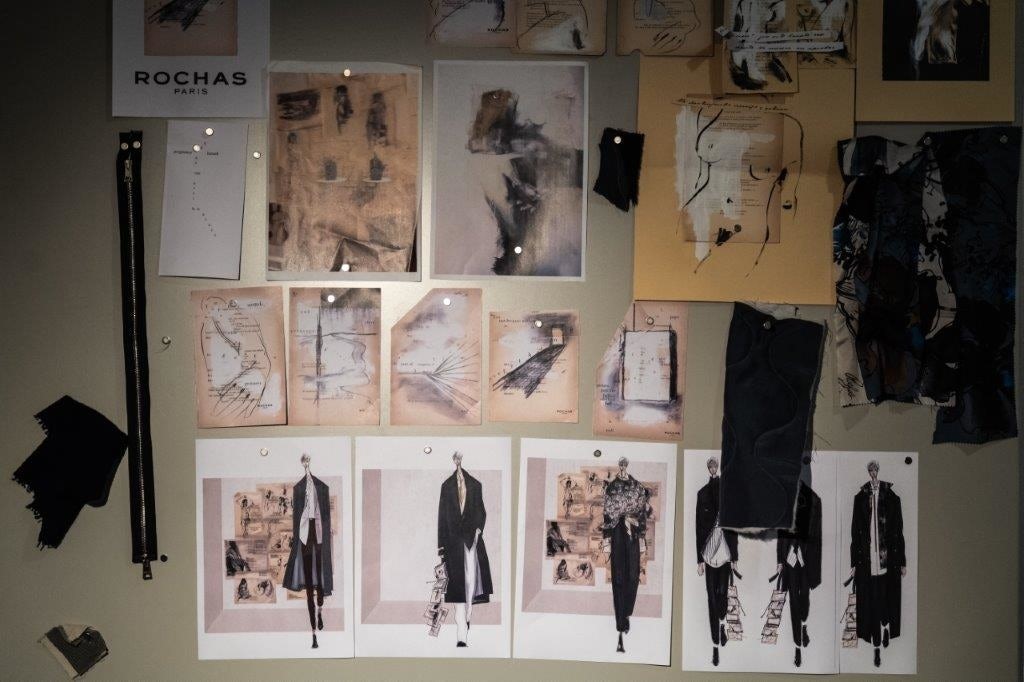 Curradi won't unveil his first Rochas collection with a fashion show. Instead, he has opted for a presentation with live models inside a workshop on the Left Bank. "This was a conscious decision: I wanted to start very quiet, in order to put clothes first," he explains. The atelier setting, as well as multi-generation casting, are also part of his wider concept. "I am after the nonchalance and the ease of artists as interesting masculine characters: their forgetful way with getting clothed, their poetry in putting colours and items together are qualities that, to me, are relevant today. I turned such ideas into an informal take on formality, or probably a formal idea of informality. One way or the other, it is the spontaneity of the artist in the act of dressing up that I am hopefully conveying with the collection. Softness is important to me: clothing has to caress the body. Softness also means the liberality of putting things together as whim suggests.”

The collection is indeed soft and modular, and takes the shape of a wardrobe, a repertoire of possibilities. “The tailoring is weightless and dignified, shirts are supple, knitwear is welcoming, outerwear is protective. A smattering of frills harmoniously clashes with nods to workwear,” he says. What really catches the eye, however, is the dusty, dense, painterly colours. Curradi has also left a series of surprises inside his garments. Most of his items feature poetic slogans hidden in the linings, inside the waistbands of trousers, below the buttoning of shirts. Slogans that look like calligrams. Little pearls of poetic wisdom, or madness. “I like the idea that those words can remain forever, even when the clothing will long be discarded,” says Curradi.

"I looked at the past to create elegance for today,” he adds. “I believe, in fact, that belonging to the present time means being just a tiny bit out of sync with it.” Word.