There was an acutely cut precision, but Jonathan Anderson's collection missed the antic charm of the men’s presentation in January. 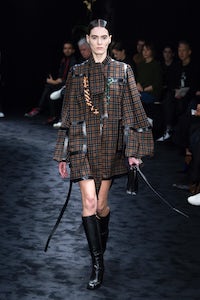 There was an acutely cut precision, but Jonathan Anderson's collection missed the antic charm of the men’s presentation in January.

PARIS, France — Jonathan Anderson did everything to guarantee drama with his latest show for Loewe. The audience took their seats in darkness, illuminated here and there by spotlit orchids and old photos. And we sat in darkness while an overture of Franz Waxman’s music from "Sunset Boulevard" played. The film's presiding gorgon Norma Desmond was an iconic drama queen, so we were prepped for more of same. But when the Loewe woman finally strode forth in a plaid smock bound by black tape, she clearly had a grip on things as tight as the grasp on her purse. It didn’t – it couldn’t — last. This was, after all, a Jonathan Anderson production.

He claimed the darkness, the orchids, the pictures (by Sri Lankan photographer Lionel Wendt) were his way of showing that the Loewe woman has rejected everything and been reduced to a pure obsession to find the best. Wendt, obscure but brilliant. Orchids, some 80 years old, some blooming once every eight years, nature’s intangible oddness incarnate. How could fashion fit into such a rigorous schema?

Trust Anderson to not make it easy. He left his biggest cookie to the finale. The show closed with Linda Scott chirping her 1961 hit "I’ve Told Ev’ry Little Star." David Lynch resuscitated it for "Mulholland Drive." That movie’s uniquely disturbing meld of the demure and the depraved seemed curiously appropriate for Anderson’s vision.

The pleated black taffeta skirt, the strapless dress in a black brocade, and a gauzy, black, polka-dotted confection were as Spanish as Velasquez. So was the Loewe-to-the-nth butterscotch peplum-ed top over the flared chocolate skirt, both in a leather that looked edible. There was an acutely cut precision there, but Anderson is always going to be too entranced by the odd to let that lie. He liked the idea of black on black, the way that silhouettes could dissolve into the shadows of his staging, so that all that was left was the line. That notion made some of the best looks in the collection, sleek and defined.

But the oddness infallibly inserted itself: the patchworked velvet bedspread cut into a tank dress, the cuffs of coq feathers on a checkerboard chenille jacket, the ornate suede capelet on an asymmetric column of black. Or how about Mica Arganaraz’s gardening outfit? Then there was the collection’s primary graphic, a slice of toast, printed on bags and hats. Anderson passed that one off as the irony of carbohydrates. Fashion’s enemy, remember?

And also, a reminder that, toast aside, the collection missed the antic charm of the men’s presentation in January. It’s almost as if this had to be more serious, more "sellable." So, yes, that happened. There was more than enough here to take to market. But what makes Loewe? That question hardly existed until Anderson started designing his collections. But soon, he’ll have to find a more convincing answer.

Editor's Note: This article was revised on 13th March, 2017. An earlier version of this article misstated that Lionel Wendt was Indian. He is in fact Sri Lankan.