Iris Van Herpen's latest collection, entitled 'Lucid,' put her spectators in a trance, thanks, in particular, to 'phantom' dresses that fused featherweight tulle with iridescent stripes in a mind-bending maze of miniature pleating. 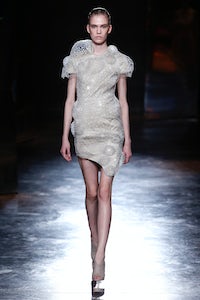 Iris Van Herpen's latest collection, entitled 'Lucid,' put her spectators in a trance, thanks, in particular, to 'phantom' dresses that fused featherweight tulle with iridescent stripes in a mind-bending maze of miniature pleating.

PARIS, France — It is no wonder that Iris Van Herpen has hopscotched between the ready-to-wear and haute couture schedules, never quite able to decide on the correct appellation for her unique creations and the anomalous way they exist within the fashion system.

Her designs merit attention for the way they tiptoe along the borders of fashion, art and industrial design — objects touched by machine and intense handcraft simultaneously — yet their place as commercial products remains obscured amidst the perpetual cycle of exhibitions and events that showcase her work.

This season Van Herpen opted for a presentation format over a runway show in the lead up to her return to haute couture in July. It was a quiet triumph. Stood still on sky-high platforms, instead of teetering down the runway, her models swayed in front of optical light screens, their reflections warped and fractured by prism rainbows, their movements dictated by the Spanish choreographer Blanca Li who watched from the sidelines.

Allowing the audience to wander around her creations was a smart move by Van Herpen — it removed the distance and speed of a runway show and prompted new appreciation for the painstaking craft of her armour-like gowns. The 18 looks that appeared here were titled 'Lucid,' a reference to the dream-like state the designer finds herself in when sketching them, and they seemed to put her spectators in one too. The collection’s 'phantom' dresses fused featherweight tulle with iridescent stripes in a mind-bending maze of miniature pleating.

Other garments furthered Van Herpen's lauded collaboration with Canadian scientist Philip Beesley, this time manifest in bubbling silhouettes pieced together from hexagon-shaped laser-cut plastics. They formed a transparent jigsaw puzzle that arrived as a cap-sleeved minidress, a circle-shaped silhouette that matched the spiraling symmetries that marked each painstakingly crafted shell.

3D-printed or not, each look paid testament to the hundreds of man-hours of labour contained in its bilious curves. It all amounted to an up-close-and-personal experience that will be difficult to match come couture. 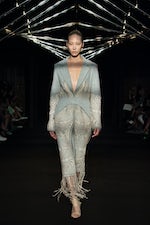 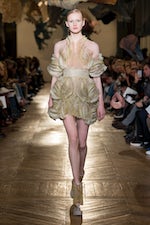 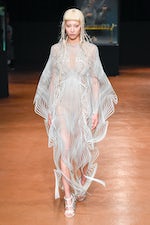 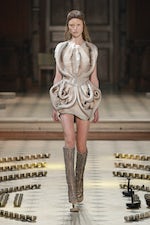