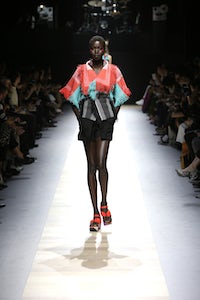 PARIS, France — While the industry reflected on a new wave of designers at some of fashion’s grandest old houses, Issey Miyake quietly proved yet again that regime change can be a seamless and beautiful thing when the ethos of the founding father is simultaneously distinct and flexible enough to inspire the inheritors to honour it at the same time as they satisfy their own yen to stretch it.

And “stretch” was once again the operative word for a collection whose colourful, body-aware (as opposed to a stricter body-consciousness) athleticism offered further proof that Issey’s legacy is one of fashion’s most enduring. It’s now 16 years since he handed over the reins to his successors, the latest being Yoshiyuke Miyamae, who has been head designer for four years. Miyake’s signature was always a combination of Japanese tradition and technology. Now it’s down to Miyamae to bring the updates.

The collection was called Botanical Delights. The vibrant patchworking and colour-blocking, the big checked tops, the skirts with raffia fringing, all set to Masatsugu Hattori’s pulsating drums, played on the Afro-Caribbean element that has insinuated itself into Spring 2016. But it was technology that yielded the most special effects. “Baked stretch” was what happened when a glue was applied to fabric and then baked in, expanding as it heated up to create permanently moulded pleats. The results were springy, undulating pieces that were sheer happiness in a dress. They took Miyake’s famous pleating to a new level of sophistication — and charm.

Mario Fortuny was the other famous pleat-master of the 20th century, but his technique died with him, and no one has ever been able to figure it out since. The Miyake studio, on the other hand, was showing a blow-by-blow video backstage, just in case you fancied baking some stretch at home. 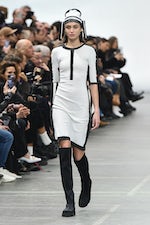 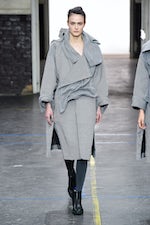 The Prism of Issey Miyake 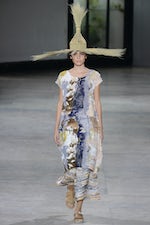 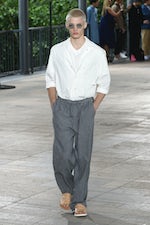 The Lightness of Issey Miyake