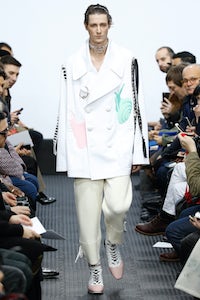 LONDON, United Kingdom — Jonathan Anderson is a man of the modern world. He loves the speed of change, the possibilities of technology. If heads were scratched when it was announced that his show would simultaneously appear on gay hook-up app Grindr — aside from the fact he shares PR representation with the site — the scratching stopped the second he mentioned the 7m+ eyeballs he'd be reaching around the world, the Sunday morning comedown being a peak traffic moment on Grindr. “How could we reach 196 countries at once?" Anderson asked himself. Quite how a mini-universe of pin-wheeling post-clubbers would respond to that question — and to the menswear Anderson was showing them by way of his own answer — demands more in-depth study.

But it's diverting to think that there was more to the Grindr connection than mere numbers. Anderson's collection had a cartoon-y, almost childish flair. There's always been a deeply perverse strand of thought in his work, so it was easy to imagine him delighting in the prospect of his twisted Disney-isms touching down in the steamily carnal atmosphere of Planet Grindr. Innocence and experience — hopelessly entangled. Which was just as it should be, because Anderson has always seen his collections as eclectic conglomerations of different elements, which cross time and space. "Flitting in and out of different rooms," he called it today. (As usual, Michel Gaubert supplied a fabulously trenchant soundtrack, this time a conversational commentary of hardcore techno.)

Watching his models parade by, you could recognise childhood's end: young princes swathed in cartoon ermine; young athletes in ribbed knit tracksuits; a toy raygun print on one outfit; on another, Bonzo, the cartoon dog who was a kid's favourite long ago. "Eclectic" scarcely touched on the strangeness. But Anderson's answer to that was simple: "People watching men walking round in a room is strange enough as it is." He's right, of course. Step back from fashion and really look at its mechanics and you can't help but wonder at the world.

Anderson certainly does. The key motif of his Autumn 2016 menswear was the humble snail, applied in glow-in-the-dark rubber on a coat, or trailing unobtrusively up a pair of black silk pyjamas. "Things don't need to make sense," he said. And again, he was right. Look around. Life is senseless. 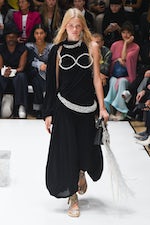 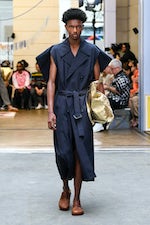 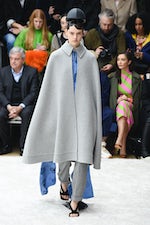 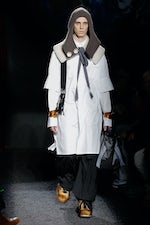