Celebrating his 10th anniversary with a sexually charged collection, Jason Wu was at his best when he went a little wild. 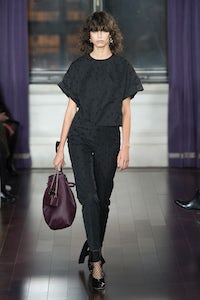 Celebrating his 10th anniversary with a sexually charged collection, Jason Wu was at his best when he went a little wild.

NEW YORK, United States — Jason Wu didn’t make much of a fuss, but this season marked his 10th anniversary in business. “I’ve been in this industry for a decade... but I’ve been obsessed with women since I was five,” the designer said backstage before an intimate runway presentation held at the St. Regis Hotel, a favourite venue.

Wu’s for-the-lady fashions have evolved since he first showed there in September 2009, but the tenets remain the same. “My work was much more naive then. She’s's grown up with me,” he said of his client, who was represented in the front row by the likes of Diane Kruger, decked out in a pleated blue blazer dress, and Amber Valetta, draped in a charcoal coat dotted with grey feathers. “She’s much sexier, more polished, more sophisticated. More put together.”

Sexier, maybe. But Wu’s woman always had plenty of polish. While the designer worked hard to expunge any hint of nostalgia, his mainstays nonetheless dominated the line up: devoré velvet burnt out into tiny lime leaves and draped into Grecian dresses, pin-dot tulle gathered into a tiered cocktail frock, and slices of velvet, satin, lace and sequins cut on a bias and into airy eveningwear. One thing that has changed, however, is Wu’s focus on day clothes. "People are dressing down,” he said, gesturing toward his own Undercover sweatshirt.

If the lady-who-lunches does still indeed exist, those trusty trunk show customers are now looking for ribbed chenille shoulder-baring sweatshirts and what might be the most refined pair of chinos known to man: cut high on the waist sans pockets, rendered in sunset-gold and embroidered with irregularly shaped dots.

To be sure, the pangs of hunger-inducing pieces in this generally understated collection were the loudest, speaking with texture, mixed media or a risqué print like the leg-baring one inspired by photographer Linder Sterling's sexpots. Wu is, perhaps unexpectedly, at his best when he goes a little wild. The sensuality bubbling under the surface looks good when it bursts through.