The tightly wound designer let go a bit this season with a pre-collection of much more than merchandise. 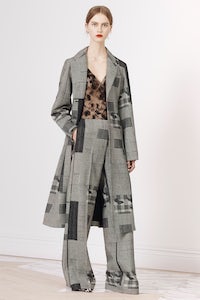 The tightly wound designer let go a bit this season with a pre-collection of much more than merchandise.

NEW YORK, United States — “Luxury people don’t want merchandise,” said Jason Wu at a recent preview of his latest Pre-Fall collection. They are eager to spend their dollars on “beautiful clothes that you can have for a long time,” he added. So instead of treating Pre-Fall as a lesser-than collection, he imbued it with a genuine fashion message inspired by the rich colours of Le Corbusier paintings and furniture, particularly the modernist’s pony-haired sling chair. “My entire house is grey flannel and Mid-Century modern, so in that way it’s very me,” explained the designer.

The collection, with its lingerie slips dotted with 3-D florals and buttery leather dresses, was indeed very “him” — modern clothes for women who like to dress. But perhaps he’s loosening up a bit. The collection’s star was a pair of glen-plaid patchwork trousers with a zipper lining the seam from knee to ankle. Undo that zipper and the already wide leg became downright billowy, worn equally well with a matching blazer or a jacquard-knit cashmere sweater, topped off with a string of pearls. A patchwork fit-and-flare dress was seamed with zippers for the same effect: one could wear it quite close to the body, or a little further away. Indeed zippers — a nod to Geoffrey Beene, one of Wu’s favourite designers — played an important role in the collection, done in hardware that matched the accessories, keeping the brand’s visual identity consistent.

But  the freeing nature of the zippers didn’t result in casual looks. A blush-coloured corseted blazer, for instance, was made to look proper when tied up with a matching belt. For evening, Wu brought some drama to his offering, including a black chiffon gown covered in an appliqued spray of purple flowers. The designer understands his customer needs clothes this expensive to be special, and he is doing his best to deliver by making the prettiest of pretty dresses. But are they more than merchandise? This time around, the answer was yes. 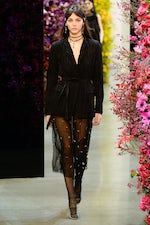 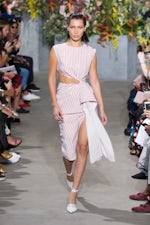 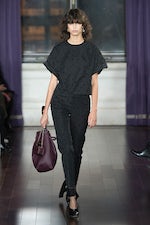 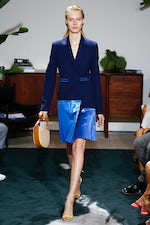