The unabashed designs that once spoke to the club kids of Scott's youth now reach a new audience of eager millennials. 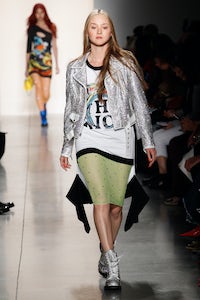 The unabashed designs that once spoke to the club kids of Scott's youth now reach a new audience of eager millennials.

NEW YORK, United States — Under a cloud of silver confetti, America's ragtag rascal Jeremy Scott marched out to a standing ovation, a fitting end to his Los Angeles-based label’s twentieth anniversary show. From Devon Aoki and Liberty Ross to Sofia Richie and Charlotte Free, Scott’s casting spliced through a genre-bending, generational layer cake of care-free beauties all prancing around in the unabashed designs that once spoke to the club kids of Scott’s youth and now reach a new audience of eager millennials.

The next generation won’t clock the self-referential moments of Scott’s Spring 2018 collection – like the trailing curlicues of ‘haute couture’ pleating that trailed off a sequinned bodysuit, or the coiling, spongy collars that harked back to Scott’s early days designing space-age eveningwear in Paris – but Scott’s never been one for pretense, which might be why those little tricks looked all the more accessible the second time around. So did his great jersey t-shirt and tank dresses, popping in camouflage and strung with suspenders or emblazoned with fish scale sequins.

Alongside boxy faux python jackets, panelled lycra mini dresses and monster print knitwear, they spoke to the ease and comfort for which Scott’s comic separates are known – ready to mix-and-match for a night on the town – whilst other more convoluted creations were a nod to his flair for the sculptural. Plastered with giant rhinestones, the finale looks jutted and bounced off the body in all directions like a disco car crash of massive proportions.