Tim Blanks details the designer's uncomfortable and thrilling presentation, which reminded him why fashion is London's ultimate resource — the wellspring of chaos and creativity unbounded by the mundane. 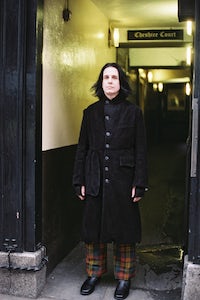 Tim Blanks details the designer's uncomfortable and thrilling presentation, which reminded him why fashion is London's ultimate resource — the wellspring of chaos and creativity unbounded by the mundane.

LONDON, United Kingdom — The UK’s twisted political climate forced the men’s shows in London to grow a pair: despair vs. hedonism, darkness at the edge of town vs. dancing on the lip of the volcano. And then there was John Alexander Skelton, to remind us why the city is fashion’s ultimate resource, the wellspring of chaos and perversity and creativity unbounded by the mundane.

For the presentation of Skelton’s sixth collection, we were called to a pub off Fleet Street, Ye Olde Cheshire Cheese, rebuilt after the Great Fire of London in 1666. Cramped. Candle-lit. At some distant point in the 16th and 17th centuries, this neighbourhood was known as Alsatia, a sanctuary for criminals, but also a mecca for creative outlaws. Skelton cast his show with a fierce-some tribe of maniacs who could have stepped straight out of Alsatia’s back pages.

In yer face? Ha-ha. It wasn’t only yer face they were in. Audience discomfort was at an absolute maximum. One wide-eyed screamer, blessed with a particularly large schnozz, sniffed, really sniffed guests. Tip of nose in ear canal snorting. Jeepers Creepers! That wouldn’t even happen at a Bernard Willhelm show! And then the designer’s brother Ryan had a full-on psychotic break in the tiny, cramped space of Ye Olde downstairs.

Skelton made an on-line comment about "challenging the banality of the rudimentary fashion show." But that in itself had a rather banal tinge. There was so little about Skelton’s show that connected with the rudiments of fashion as it currently exists that his comment was superfluous. Better to celebrate the way his show and his clothes comfortably thrived outside the banal, like the Ultima Thule of menswear. The arcane and the artisanal met in antique French grain sacks transmogrified into swirling coats, in wools woven in the foothills of the Himalayas washed to a perversely seductive shabbiness, in a chaotic patchwork of knits.

Skelton’s men om-ed as they walked. Deep sounds reverberating from the bowels of their being. He said they were inspired by Meredith Monk’s Dolmen Music, but her noises were spun gruff to delicate. His were simply scary. Om, the primordial sound. Coupled with the aggression of the noisemakers, the ruffling of hair, the grabbing of cameras and phones, the scribbling in notebooks, it was a caveman moment. Understandably, there were some guests who reeled away in a cloud of discomfort. How do you process that? Fabulous striped linen suits don’t quite cut it.

I was thinking about Paul Harnden and Carol Christian Poell, and the odd moments where men’s fashion – which has, after all, been bound by a rulebook of utterly military discipline – cut loose in an effort to embrace a past where men fought their destiny, where poets, artists and humanists tried to rewrite the rules. Skelton made that fight physical in his show. It was intensely uncomfortable to experience, but one sat there wishing that it could, in some weird way, become a new kind of normal. Challenge everything you know as aggressively as you can. Right now, that's politics.