The Death of Rock

The designer transformed his Bowery store into a funhouse. 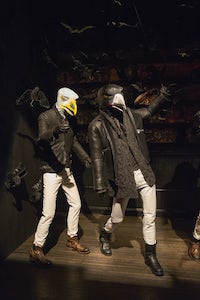 The Death of Rock

The designer transformed his Bowery store into a funhouse.

NEW YORK, United States — In 2008, people were angry when John Varvatos took over the iconic CBGB club on New York’s once-downtrodden Bowery to open an upmarket fashion store. But, that was almost a decade ago and with time comes acceptance. It also helps that Varvatos lives for rock and roll, and that he counts plenty of well-regarded musicians as friends. It’s not as if Gap moved in.

On Tuesday, Varvatos put the venue to good — if ironic — use, turning it into a funhouse exploring the idea that rock may be dead, not just as a music genre but also as an attitude. At the entrance, stood a row of coffins occupied by mannequins wearing the brand’s leather pants and sharp red velvet boots. One plaque read: “Fast Foot Freddy. Drummer for the band Bootsy. Known for his fast footwork and killer shoes. Killed by the record industry.” Masked models in velvet suiting and leopard-print sweaters danced around in small spaces. In another room, there were a series of stand-up collar topcoats in houndstooth and camo propped up on wires. Globes hanging above them reflected the faces of Bernie Sanders and Hillary Rodham Clinton. A skeleton was draped in a tweed coat trimmed generously in fur.

The concept came about when Varvatos was asked if there was an expiry date on the whole rock thing. “I thought, ‘Are you talking about inside of us because we have a bunch of clowns running for president and no one is a rebel except for Miley Cyrus?' Because there is nobody with big voices today and nobody is being disruptive?” he told BoF, as Pink Floyd’s “Another Brick in the Wall” blasted in the background. “I really was zeroing in on being your own person. When I started planning my runway show, I thought, 'Do I really want to do another one, with all the guys looking serious? Or do I want to have fun, be playful and tell a message that runs through the whole thing?'” 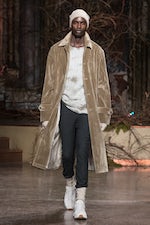