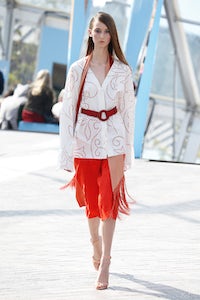 LONDON, United Kingdom — Jonathan Saunders wears his heart on his sleeve. His emotions are always pretty close to the surface, and his collections have always reflected his state of mind, sometimes for better, occasionally for worse. He was a most happy man after his show on Sunday because everything went right. Imagine if there’d been rain pelting down on his clear plastic tent.  (It’s been doing that an awful lot lately.) His sky blue bleachers would have looked quite forlorn. Instead, there was blinding sunshine, the perfect complement to a collection that trafficked in sensual exotica.

Saunders went transcontinental, taking traditional textiles and shapes from India, Persia, Africa, Japan and twisting them till they were his. The paisley, for instance, or, closer to home, the utterly gorgeous guipure lace pieces.  Saunders said it was all about accidents. He insisted that's how he achieves his effects. But there is also some genius instinct that protects him. It must be his colour sense, because, as usual, that's what did a lot of the heavy lifting for him. Intense unusual shades in strange combinations are the designer's calling card. That guipure, for instance. The yellow here was particularly sick. Saunders also has an enduringly perverse affection for brown.

But the unifying principle of the collection was actually the bias cut, the sinuous diagonal that gave everything a flip and a flou and a sensual ease. Effortless in effect, arduous to attain the desired result, according to Saunders.  But the ease of the bias cut was amplified by wrapped skirts, waists tied with fringed scarves, coats that were updated kimonos.

Victoria's Secret's New Owner Has a History With Troubled Brands