The duo's considered approach and sense of realness has won them success amongst smart young women. 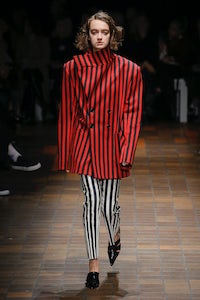 The duo's considered approach and sense of realness has won them success amongst smart young women.

LONDON, United Kingdom — Not long ago, a friend ordered a top from Marques’Almeida’s website. It arrived with a hand-written letter and a charming pack of imagery from the label, inviting this new customer to become what Marta Marques and Paulo Almeida call an “M’A girl”.

That’s the kind of considered approach and sense of realness that has won the duo success amongst smart young women. Every season, they look to their crew of M’A girls — friends, models and people they work with — and design clothes that become instant sartorial hits; just think about how many of those shearling-lined metallic jackets you’ve seen around. This season, by the way, there are plenty of updates on the style.

Copies of The Face from the 90s will be an eternal source of inspiration for the designers, informing the lens with which they design and style, but this season they were looking at Malick Sidibé’s photography and listening to Nina Simone. Sidibé was Mali’s roving street style snapper in the 50s, 60s and 70s, capturing the joyful way young people were dressing and using clothes to feel and look beautiful. Simone was the fearlessly strong artist with great taste — especially in earrings.

Beetlejuice stripes, chequerboard squares, marbled jacquard, funky tie-dyes and spots of all kind of varieties gave the clothes in this show a graphic sensibility. Proportions were generally kept large, with enveloping coats and super-long sleeves. Where that worked best was when there were cuffs that could be turned up to reveal a dashing contrast, like the ones on a pair of marigold trousers, or held together by a ring fastening. After all, practicality is important, especially as these are clothes with real people in mind; M’A girls may like grunge-y lengths, but they eat spaghetti too.

Above all, though, the show was fun — and not in a contrived happy-go-lucky way, but rather with a sense of joyful realness. The models in the show, a mix of women belonging to different ages, sizes and heights, are always ecstatic about what they’re wearing. Most models at fashion shows can’t wait to get out of their frocks and back into a pair of jeans. Backstage, ask any one of those women and they’ll have a list of favourites to add to their shopping lists, and at the end of the day, that’s the kind of appeal that you simply can’t fake.