The fabrics were certainly special, but otherwise the design seemed a little bit lazy. 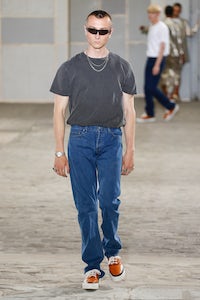 The fabrics were certainly special, but otherwise the design seemed a little bit lazy.

PARIS, France — A plain t-shirt and a pair of five-pocket jeans, or chinos: the first three outfits on the Julien David catwalk — actually, the paved floor of a garage — were as ordinary as it possibly gets. The fourth was a simple blue jumper, spelling out loud: ORDINAIRE.

You get the picture. This season, Julien David went on an exploration of simplicity. "I wanted to convey my idea of the every day, doing each piece in the version that is more expected," he said backstage "This was also a good opportunity to introduce denim, as we have never done it before."

And every day it was: pared down to the point of non-appearance, save for a couple of metallic outfits. All in all, such stress on normally made things was a bit too quiet. Fabrics were certainly special, but they looked expected, too. The design, otherwise, seemed a little bit lazy: t-shirts, fatigues, field jackets and five pockets are such timeless staples, they almost seem to be self-generated. A bit more effort would keep the audience engaged.