The designer delivered a collection that was as normal and charming as always. 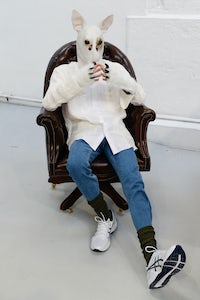 The designer delivered a collection that was as normal and charming as always.

PARIS, France — The appeal of randomness is undeniable, at least for designer Julien David. So is the charm of clumsiness. The work of this Japanese-resident French designer is not easy to categorize and describe, and not because it is complicated or intricate. Quite the contrary, in fact. It's just that David toys with ideas such as normality and ease, delivering well-made pieces in interesting fabrications that look utterly familiar or just plain every day. As a designer, so to speak, his signature is making things that do not seem to have been designed at all. At least, not in a fashion way. It takes quite a lot of effort to nail this.

The collection David presented today in a white-washed gallery in the Marais was, according to the designer, a social study on the normal guy and the way he puts things together haphazardly. He avoided a show format, opting for a performance-like presentation. Models wearing dog masks — a way, according to David, to highlight their normality by concealing their faces — were displayed in tableaux vivants depicting the habitats of the normal guy, from the bedroom to the gym. It was a fun situation and a good way to appreciate the clothes up close. They were as normal and charming as always.