Junya Watanabe's forensic eye for detail dissected and subtly reconstituted the most prosaic pieces of clothing, giving them new life. 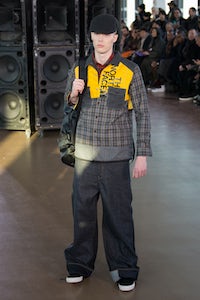 Junya Watanabe's forensic eye for detail dissected and subtly reconstituted the most prosaic pieces of clothing, giving them new life.

PARIS, France — One day, Louis Vuitton X Supreme. The next, Junya Watanabe and The North Face. When “reality” is fashion’s over-riding theme of the season,  nothing says “real” like a collab with a highly credible street brand. But Junya scarcely needs to chase credibility. It made more sense to see his hook-up with The North Face as the latest in a long line of meditations on the different ways men dress themselves for work and play.

A recent trip to San Francisco refreshed his enthusiasm for American street culture, the inspiration for the skater/snowboarder/rapper tribe which sauntered past the huge bank of speakers pumping a hiphop mix by DJ Mitsu. The components of the look — the hoodies and toques, the hightech footwear, the saggy pants slung low over a concave ass —  were familiar enough, many of them produced in tandem with names as  unimpeachable as The North Face, like Levi’s, Carhartt and Pendleton. But Junya’s forensic eye for detail has always been able to dissect and subtly reconstitute the most prosaic piece of clothing so it takes on a new life. Such mutations are his signature, and they were plain to see here in the jackets and coats which collaged fabrics and textures, tailored and casual together: a tweed double-breasted with quilted nylon sleeves, for instance, or the houndstooth coat with leather sleeves transplanted from a biker jacket. A duffel and motocross hybrid was especially striking.

Speaking of which, the first model out left a huge North Face duffel bag on the catwalk. This particular piece was reworked by Junya on the inside of a coat, so its handles became straps from which to suspend the coat when it was thrown back off the shoulders. Such technical ingenuity makes Junya Watanabe quite the equal of the streetwear boffins in their West Coast research facilities.