There was a quiet ingenuity at work, but the source material — houses dresses — had a utilitarian dullness that levelled rather than lifted the collection. 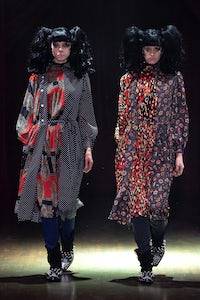 There was a quiet ingenuity at work, but the source material — houses dresses — had a utilitarian dullness that levelled rather than lifted the collection.

PARIS, France —  The glassily pink little anime girl, mounted on a field of teddy bears on Junya Watanabe’s invitation, was so obviously kawaii that it came as no surprise to learn that this was the name he’d given his collection. Kawaii is the spawn of Hello Kitty, the subdivision of Japanese pop culture where terminal cuteness resides. Watanabe clearly toyed with the idea on Saturday morning. His models walked out in pairs, pink-lipsticked, hair in big bunches, with big doll-like eyelashes. And yes, they did indeed look like oddly matched robotic dolls. Grimes chirruped “We Appreciate Power” on the cyber-soundtrack, compounding the effect.

But the models were sullen, and they were wearing lethally spiked cowboy boots. And their clothes were like old house dresses, which were dissected and stitched back together again in muted collages of fabric. Not so cute. In fact, more like an object lesson in making clothes last through hard times (those house dresses had a definite dust bowl connotation). College sweatshirts (UCLA) were cut into the mix. So were cardigans and biker jackets, cable knits and tweed blazers, scissored apart then stitched and needle-punched together to make hybrids not just of cloth but of the original items of clothing themselves. It was not an original proposition from Junya — hybrids are his fashion life’s blood — but it was striking here for its sheer ordinariness.

Backstage, you sought the usual gnomic response. And it came: “No meaning.” But this time, that wasn’t enough. Turns out some of the dresses were reversible, so the paired models were actually offering an inside/outside look at a single outfit. The pairing also provided an opportunity to see a single piece — an MA-1 jacket, for instance — refracted in two outfits.

There was a quiet ingenuity at work, but at the same time, the source material — houses dresses? - had an essential utilitarian dullness that levelled rather than lifted the collection. Maybe that was the point. Sustainability is the issue that currently rivets the fashion industry. Circularity, recycling, upcycling — all words that will gain more and more weight in years to come. Here was Junya’s response. To be sure, he had reproduced the vintage dresses he used (up to three per look, apparently) but there was still something instructive about the way he took them apart and put them back together. Elevate the ordinary — it’s one of sustainability’s battle cries. I’m still not getting the kawaii though.