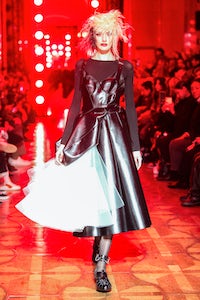 PARIS, France — Junya Watanabe’s teen dream was Debbie Harry. She was the spirit animal of his show on Saturday. He titled it SEXY with her in mind, and Shepard Fairey’s portrait of the woman who put the blonde in Blondie adorned the invitation.

And all at once, it came to me. Junya’s womenswear is his dreamworld, his menswear is his reality. The collection he showed for men in January was a triumph, fusing practicality and creativity in a single irresistible alchemy. Saturday’s presentation was something else altogether. It opened with catwalk and crowd bathed in a hellish red glow. The models walked in stone-cold silence, with ratted platinum hair, smeared lipstick and eye shadow. Their outfits mutated punk’s black leather and bondage straps and harnesses into elegant new silhouettes, a sort of best-dressed-dominatrix scenario. That is, by my count, the third time this fetishistic embodiment of female power has appeared on a runway this season, which means she is now officially a trend.

The whole thing was like a fever dream. Then the silence ended with the intro to “Heart of Glass,” the lights snapped on, and the models stepped out of that dream into the daylight in their pointy, punky little Trickers booties and leopard tights. Everything that was formerly black was now duplicated in red, like Malcolm McLaren hiding the grit of the New York Dolls behind red patent leather. Then there were oversized blazers and the big tweedy overcoats that punkettes used to pick up at thrift shops, thrown over t-shirt dresses. There was also a zebra-print shirt dress and python-print skirt, echoes of the punk-shading-into-New-Wave look that Debbie Harry made her own forty years ago.

The blonde Harry was most often compared to was Marilyn Monroe, a more polished fantasy than the one Junya presented here. The bleariness of his models put me just as much in mind of Courtney Love’s provocative kinderwhore. Almost every look was accessorised with bondage harnesses or a lattice of straps, so emblematic of s&m restraint. But, equally, almost every look in the show was accompanied by some variant of a bag or three: a ladylike quilted version, crossbody and saddle-bags, a bowling bag, a coin purse, a clutch. Junya’s woman clearly meant business. Dominance and submission demand an organised mind.

There are so many artifacts testifying to the impact of punk on Japanese culture. It’s easy to see why punk’s transgressive essence was a fantasy to kids living in a society as regimented as Japan’s, just as it’s easy to understand how a platinum blonde pinup could be a fantasy to a hormonal teen. Junya drew both strands together on Saturday. But maybe Debbie Harry was never really hardcore enough for him, because he wished her so in his show.