The collection was appropriately rough and ragged but what registered most was its playfulness. 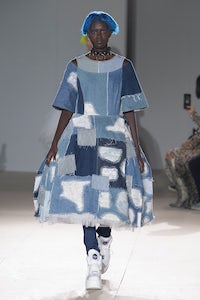 The collection was appropriately rough and ragged but what registered most was its playfulness.

PARIS, France — Junya Watanabe likes heavy metal. Some of his models wore t-shirts branded Strikeback, a Spanish metal band. But Watanabe wanted to focus on “the romantic side” of hard rock. His soundtrack was Queen, not thrash. And he mutated denim, the uniform of rock, with tutu-like froths of tulle and couture-worthy detailing: fishtails, bows, ruching, hourglass silhouettes on gowns hewn from the raw cloth itself.

With “Bohemian Rhapsody” setting the tone, there was an occasionally operatic quality to Watanabe’s exaggerated volumes. He tempered his denim with an antique scarf print, a linen brocade and a denim jacquard, like a collision of cultures old and new, high and low.
And the collision was appropriately rough and ragged. The most functional bits and pieces – dungarees, shredded jeans, white tees – were slammed up against satin and lace, and those extreme silhouettes. Basic function was alchemised into purest form.

This is something that Watanabe has excelled at in the past (who that was there will ever be able to get his Autumn/Winter 2006 menswear collection out of their minds?), but here, there was something almost childlike about the way fabrics were layered or tacked together. What registered most was the playfulness, the lightness of touch. It was a reminder that, whether you take the hard or soft option, music is a wonderful mistress, and Watanabe truly did her proud with this collection.