The brand's latest collection had a innocent, boyish, summery edge, but there was an inescapable suggestion that, when the games stop, the shit gets real. 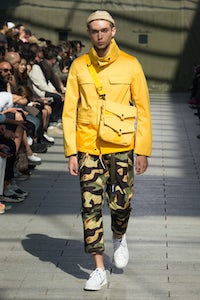 The brand's latest collection had a innocent, boyish, summery edge, but there was an inescapable suggestion that, when the games stop, the shit gets real.

PARIS, France — Junya Watanabe’s invitation was a piece of khaki card. His backdrop was an army tent. And one of his new collaborators was Ark Air, designed, says its literature, “by the brand that’s trusted by special forces all over the world”. So the imperial blast of music that opened the show sounded like the final cue for a military theme, perhaps a rumination on the tides of aggression that are rising with international populist movements.

Hah! Junya doesn’t ruminate. That music soon resolved itself into the soundtrack from Thunderbirds, the 1960s puppet show featuring the super-heroic Tracy family and their secret organisation International Rescue. It was a huge hit at the time. And it clearly resonated with a young Junya. As much as it is ever possible to get much out of him, he mentioned “innocence” and boys “obsessing over heroes” as clues to his collection.

And it did indeed have a innocent, boyish, summery edge. The soundtrack switched to the theme from The Longest Day, then “Colonel Bogey’s March”, the sort of marching band earworms that would once have had kids whistling along in their pretend war games during the summer holidays. In their checked anoraks or striped tees, shorts and beanies (by Beton Cire), Watanabe’s army could equally have been playing Where’s Waldo? Aside from the camo accents – and the ARMY tee – the other obviously military feature in the collection was the pocketing: big pouches on padded vests, kangaroo pouches on anoraks, crossbody bags, holster bags. They seemed appropriately protective.

But you might also pause to reflect on how much the items that Watanabe returns to most often – the pure sportswear of the parka, the bomber, the fisherman’s vest – also have roots in military uniforms. It made sense that the best pieces here were the parkas, one in Yves Klein blue, with big white buttons, the other in fire engine red.

There was surely subtext if you wanted it to make it up. Watanabe is, after all, from Japan, a country which lives in the long shadow of the consequences of male belligerence. The show closed with the models in t-shirts by a handful of young graphic artists. One featured a jet, another read BOOM BOOM BANG. A couple more were tie-dyed or flower-powered. Imagine kids playing soldiers, kids playing anti-war demonstrators.

There was some kind of dialogue about new masculinity in there somewhere, and, for all the playfulness, an inescapable suggestion that, when the games stop, the shit gets real. Say “Thunderbirds” to Junya and he said “International Rescue” right back. God forbid we actually ever need them.