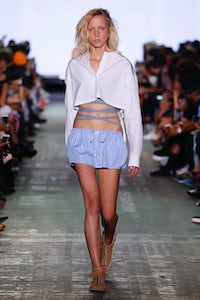 NEW YORK, United States — Alexander Wang came from San Francisco, but he's always been a prince of New York City, feeding off the energy of the street‎, totally down with the kids. And never more so than on Saturday night when he populated his catwalk with Manhattan’s urban tribes.

But he didn't stop with downtown, skaters and breakers and hiphoppers and ragpickers. (A big leopard coat will always look like a prime vintage find. The little fringed booties were a close second.) There were surfers (sure, Cali's in Wang's blood but consider Montauk as an outlier).

And the Upper East Side and Wall Street were in there too, the formality of a banker's stripe, grey flannel and Glen plaid, forensically dissected, cropped into tiny little tops, a hipslung plaid microskirt, and baby bloomers, striking in their brevity. ‎A tux shirt was trimmed to its bib front. A tux jacket was worn over electric blue bra and shorts. lace-trimmed, neon-coloured slip dresses? Grunge, meet hiphop.

Right there, Wang nailed something about the streets of New York in a feverish summer. Clothes are a hindrance. Whatever your shape or size or gender, less is best. The body rules. Celebrate skin. Where does this leave someone whose business is the careful construction of a clothing collection, someone like Wang, in fact?  In its breezy, random seeming-spontaneity, his show felt like the end of the line for that train of thought. One of his tops read Mind Detergent. A product to cleanse bad thoughts? Or rinse away restraint?

In contrast to the baring, the evening's big reveal was all about the cover-up, Wang’s collab with Adidas, an all-black, gender-neutral group of tees, sweats and trackies “which flipped branding conventions” according to the press release.‎ (It turned the Adidas logo upside down, at least.)

With a guerilla filmlet, and a shoot by Juergen Teller (featuring Rocco Ritchie, whose mum Madonna was in the front row, Wanged out in the new range), it constituted the kind of 360 experience that is critical for the infiltration of the target market these days, compounded by the after party where McDonald’s served burgers, 7/11 did the snacks, and a stellar cast of hiphop brandnames supplied the sounds.

It was impossible not to compare Wang’s massmarketing fest with the other Adidas spectacular this week, Yeezy’s performance art piece/test of human endurance.