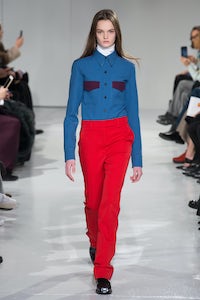 NEW YORK, United States — Anticipation’s a bitch. There are few things that make the worm turn as fast as an expectation raised, then dashed on the rocks of cold, hard reality. Raf Simons’s debut for Calvin Klein on Friday morning winged in on a sense of event that is rare in fashion now. Its carefully cultivated atmosphere of Garbo-esque mystery was a risk. Evanescence or substance – which would it be? As the poignant strains of David Bowie’s "This is not America" faded into the ether at show’s end, it was clear that Simons had pulled off a dazzling balancing act. Not either/or, but both.

That was always Calvin’s trick too, the flesh and the spirit in glorious tandem: nothing-more-basic jeans and white cotton y-fronts, garlanded with a Bruce Weber advertising campaign that could be as sexual as Marky Mark grabbing his crotch, or as cerebral as Georgia O’Keeffe at home in Taos. Polar extremes of the American dream. Maybe it takes an outsider to clarify that vision: its aspiration, its impossibility, its melancholy. As much as he helped define American fashion, Klein himself was always something of an outlier, a sexual libertine more inclined to the decadence of the Old World in his appetites. That sensibility was the spice of his suggestive advertising campaigns.

Raf Simons’s first advertising campaigns for Calvin Klein jeans and underwear synthesise flesh and spirit for a new age, but the outsider sensibility is the same. In some of the images, the models stand in their tighty-whities in front of paintings by Andy Warhol, patron saint of the outsider. Their casual attitude is the antithesis of Weber’s Adonises fallen to earth in the 80s, but the peculiar disorienting effect is the same. You stop, you stare. You feel sad. (Simons’s models are, after all, looking at a giant skull.)

And that might have been the key to the collection Simons showed on Friday. I kept thinking of "American Honey," for no reason other than that movie expressed a British director’s absolute fascination with the kind of Americana which is invisible to anyone born and bred there. The same kind of melancholic fascination that oozes from David Lynch’s films – what do you find when you turn over a rock?

Simons has visited Lynch country before in his own menswear collections, but now his cast included boys and girls, and that obviously expanded the frame of reference exponentially: college boys and majorettes, cowboys and rodeo girls, some eerily beautiful experiments that trapped fake fur and feathers in cocoons of transparent vinyl, obvious references to Pop Art. But posed against that fetishistic note was the homespun authenticity of Amish quilting, cut into a coat sutured with sleeves from a stockbroker’s suit. It was truly one of those all-forms-of-human-life propositions, distilled from the mind of a man coping with a vast continent of — to him at least — discombobulating newness.

And then the soundtrack referred to the Lisbon girls, the Virgin Suicides themselves, suburbia’s sacrificial lambs. (Sofia Coppola, the movie’s director, was in the front row next to A$AP Rocky, Millie Bobby Brown from "Stranger Things" and artist Cindy Sherman. Anyone mulling FROW death might want to parse that line-up.) By the way, about that soundtrack. From his hospital bed, Michel Gaubert and his right hand Ryan Aguilar conjured up an aural tapestry that illuminated the collection to the extent that you could appreciate, sight unseen, exactly what Simons and his Creative Director Pieter Mulier were attempting: Roy Orbison’s "In Dreams," John Barry’s theme from "Midnight Cowboy," "I Only Have Eyes for You" by the Flamingos, Bowie’s "This is not America." Playlist that at home and tell me it doesn’t take you, misty-eyed, to a place where you aren’t already. This is not America...but it is.

One more thing: Simons has made no bones about his reverence for Helmut Lang. Now, his move to New York has placed him on a peculiarly similar career arc. There was a time at the turn of the century when the Klein and Lang creative teams intermingled to occasionally ambiguous — and critically challenged — effect, but with this debut collection, Simons underscored the brand’s enduring contemporaneity, unabashedly injecting Lang’s challenging essence into the veins of the American heartland, acknowledging its profound, polarising but seductive oddness.

How it will play in Peoria is anyone’s guess, but, for today, it was just what Calvin Klein needed.